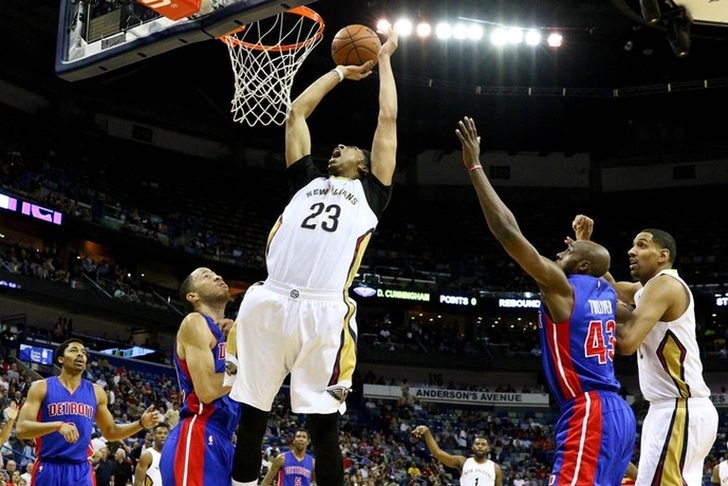 New Orleans Pelicans superstar set a franchise record and personal best by hitting the 50-point mark on Sunday. Unlucky for the Detroit Pistons, he kept going.

Davis finished with 59 points (on a stunning 24-for-34 shooting) and 20 rebounds in an all-time epic individual performance, pushing the Pelicans past the Pistons by a 111-106 count in Motown.

He came up just one point shy of the first 60/20 game in the NBA since 2000 when the Los Angeles Lakers' Shaquille O'Neal posted a historic 61/23 against the Los Angeles Clippers. O'Neal and Davis are the only two players in the last 40 NBA seasons to post 55 points and 20 rebounds in a single contest.

This is the second time that Davis has eclipsed at least 40 points and 15 rebounds in a game, and he's the first player to do so in the NBA this year. His 59 points is also an NBA best for 2015-16, eclipsing Sacramento Kings big man DeMarcus Cousins' 56-point outburst against the Charlotte Hornets on January 25th.

In addition, Davis' 24 field goals made is a season high -- bettering Cousins' 21 in the Kings' 2OT loss to Charlotte. No other player in the league this year has made more than 19 field goals in a single game.

Davis had 26 points and 13 rebounds going into the half, but the rest of the Pelicans weren't able to follow suit as the complementary offense sputtered in a 55-55 tie.

While Davis had just seven boards in the last 24 minutes, he scored 33 of his 59 to will New Orleans past Reggie Jackson (34 points) and a game Pistons squad.

More from Davis' historic performance inside the Chat Sports iPhone and Android apps!