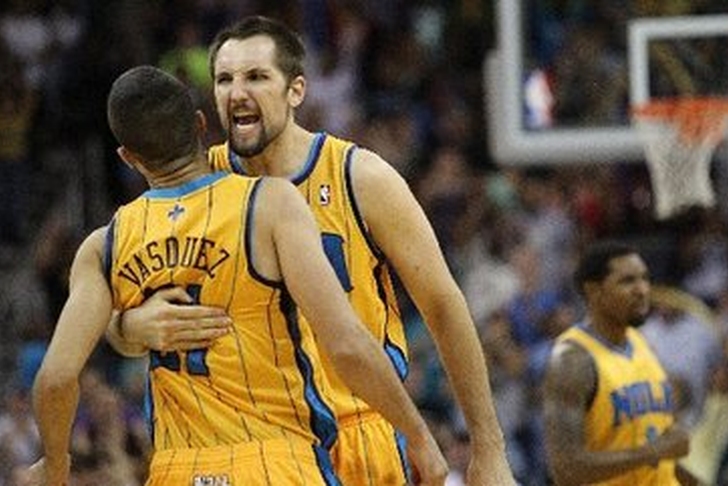 Here we are at the metaphorical mid-point of the NBA season, the All-Star break, and it would be an understatement to say that the year has not gone exactly as Hornets hoped. Some fans (myself included) visualized a squad led by Eric Gordon and Anthony Davis challenging for a playoff spot and serving notice to the league that they were a team on the rise. Unfortunately, injuries kept both Gordon and Davis off the court for extended stretches, and the team spent most of the season in last place in the West once again.

Even so, they were much more competitive than fans may have remembered, and since Gordon and Davis returned have looked like a whole new team. They have pulled themselves out of the cellar, and while a playoff berth doesn’t look likely at this point (though not impossible), the stage certainly seems set for the team to make a major leap next year.

But that’s next year, let’s look at some of the top players on the Hornets thus far this year, along with some predictions on the upcoming All-Star events…

Perhaps the greatest free agent acquisition in Hornets—Charlotte or New Orleans—history, Anderson played a major role in keeping the Hornets competitive even through their woeful start to the season.

Last year’s Most Improved Player picked up right where he left off, leading the league in 3-pointers made (159 as of the break), on .402 shooting from long range. On the pace he’s at, Anderson should shatter the franchise record for threes in a season (207, by Glen Rice in 1996-97), and if he can increase his current three-threes-per-game pace just a bit, has a chance to be within striking distance of Ray Allen’s NBA record for threes in a season (269, set in 2005-06).[caption id="attachment_107" align="alignright" width="300" caption="Ryan Anderson and Greivis Vasquez have kept the Hornets afloat this year"]

Despite all this, there was no room for Anderson on the All-Star team (I personally think he could’ve made it over either David Lee or Zach Randolph). However, he will represent New Orleans on All-Star Saturday as an entrant in the Foot Locker Three-Point Contest.

Vasquez has elevated himself from “keeping the starting PG spot warm until Austin Rivers was ready for it” to “one of the better point guards in the NBA.” Currently posting career highs in points (13.9 per game), rebounds (4.6), and assists (9.4, which ranks third in the NBA), and having recorded his first career triple-double, Vasquez has established himself as a capable floor general in the league.

Future MVP, and Rookie of the Year: Anthony Davis

A concussion and a minor foot injury put a quick damper on Davis’s debut campaign in the NBA, but since his return he has shown promise that he will become everything Hornets fans hoped he would. Despite playing somewhat limited minutes since coming back from his injury, Davis has averaged 12.5 points, 7.5 rebounds and 1.9 blocks per game. Not quite the expectations some had for him, but the best is clearly yet to come for this future superstar.

Davis will also be representing the team this weekend, having been the first pick for Team Chuck (Charles Barkley) in the Rising Stars game Friday night.

Yeah, the game itself is likely to be a defense-free sham of a competitive basketball game. But the other events make for some fun mindless viewing, so let’s try to pick the winners!

Note: For the first time, the various contests will be conducted in an “East vs. West” format, where there will be three competitors from each conference that will compete in groups, with the winners of each conference meeting in the final round.

Team Shaq put together an absolutely beast of a backcourt combo, taking Damian Lillard and Kyrie Irving with their first two picks (Yeah, they’re both point guards. This is an exhibition showcase game, they’ll both start.). But their frontcourt is very thin, which should allow Team Chuck’s frontcourt of Anthony Davis, Kenneth Faried and Kawhi Leonard to run wild and lead Chuck to his second consecutive victory.

This one might be the toughest to call, as these are all fine three-point shooters and the winner could easily be any one of them, it’ll just depend on who has the hot hand. As much as I’ll be rooting for Anderson, I have a feeling we’ll see Curry (currently tied for second in the league in 3PT%, and perhaps bitter about his All-Star snub) top the western half and take down Kyrie Irving in the finals.

Tony Parker comes into this as the defending champion, but it’s unlikely that he’ll successfully repeat. Damian Lillard has been a rookie phenom thus far for Portland, and will continue his impressive debut by taking down the veteran (and Jeremy Lin) to win the west.

But it will stop there, as he’ll run into Jrue Holiday in the final, who should breeze past Knight and Teague to take the east. Holiday, at least in this writer’s opinion, has the best combination of shooting and passing skills of the competitors in this year’s field, and in a competition that requires you to do both, Holiday will take the title.

About a year ago I got NBA TV on my cable service for the first time, and as luck would have it, the first week they were playing marathons of dunk contests from the 80s and 90s. Watching superstars like Michael Jordan, Dominique Wilkins and Clyde Drexler along with lesser-known guys like Terence Stansbury and Jerome Kersey perform their aerial acrobatics was and is simply more entertaining than what we get now, where almost no superstars want to participate and it’s all about who can come up with the goofiest gimmick.[caption id="attachment_108" align="alignright" width="300" caption="James White is not a household name. But he'll turn heads Saturday night."]

That’s why I’m looking forward to this year’s competition, where James White has a chance to take it back to the old school. White’s been dropping highlight-reel dunks since high school, and doesn’t need props to do it. He should have little problem reaching the finals, where he’ll meet Eric Bledsoe. Bledsoe has the Spud Webb/Nate Robinson factor going for him, where at 6’1” his jumps will look especially impressive, and that should help carry him through the western side of the contest. But in the finals, James White will claim his destiny and win the dunk contest, Chris Candido style: No gimmicks needed.

This one’s more of a hunch than anything else. As said earlier, this is more of a highlight contest within a game consisting of almost no defense, as seen by scores consistently reaching the 130s, 140s and even sometimes 150s. The West has won the last couple by slim margins, so I’ll call the East to come back with a win this year. For an MVP, I’ll guess that LeBron James gets the honor.