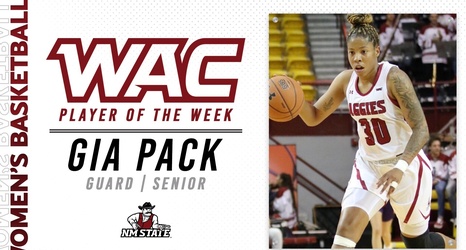 DENVER – has been named the Western Athletic Conference Player of the Week for the week of Dec. 2 through Dec. 8, the league announced on Monday.

The senior was on fire over the weekend as she averaged 22.0 points on 75-percent shooting from the floor. Against Western New Mexico, the Phoenix, Ariz., native scored 26 points on 8-13 shooting and 4-5 shooting from three. She followed that performance up with 18 points on 8-9 shooting in a 77-47 win over Weber State.

Pack also moved into sole possession of 10 place on the NM State all-time scoring list and currently sits at 1,444 points for her career.