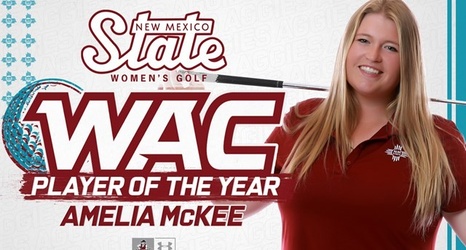 DENVER – The New Mexico State women's golf team swept the three major WAC postseason awards as Amelia McKee was named Player of the Year, Alison Gastelum Freshman of the Year and Danny Bowen coach of the year. Along with McKee and Gastelum, Pun Chanachai was named First Team All-WAC for the fourth time in her career.

McKee finished the season as the team leader in stroke average at 74.82 and finished tied for eighth at the WAC Championship after shooting a five-over-par 221. The Spring, Texas, native also wrapped up the season ranked 282 in the NCAA individual rankings, tops in the WAC.