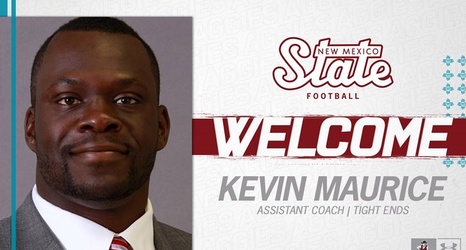 LAS CRUCES, N.M. - In an announcement made Thursday by NM State head football coach Doug Martin, Kevin Maurice has joined the Aggies' staff where he will serve as an assistant coach. Maurice, who spent the last five seasons at NCAA Football Championship Subdivision (FCS) program Eastern Washington, is set to take over as the Aggies' tight ends coach.

Helping to craft one of the most potent offenses on the FCS scene, Maurice oversaw a talented crop of backfield rushers through his half-decade in Cheney, Wash. This season, the Eagles (5-1) have a good chance to receive an at-large berth to the FCS Playoffs behind thanks to the play of Tamarick Pierce and Dennis Merritt in the backfield.