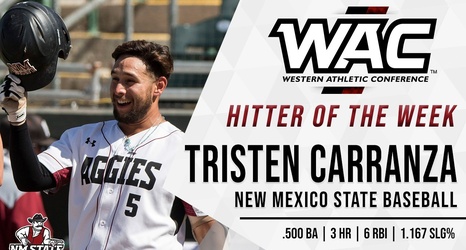 DENVER – The Western Athletic Conference announced its players of the week on Monday. Following an impressive weekend at the plate that led the team to a series win over La Salle, New Mexico State's Tristen Carranza earned the WAC Hitter of the Week honor.

Carranza led the WAC in slugging percentage on the week at 1.167, with five extra-base hits in the series win over the Explorers. With a hit in each game, the senior's best performance was in the nightcap of the Saturday doubleheader, going 3-for-5 with three RBI and two runs scored on a pair of home runs.