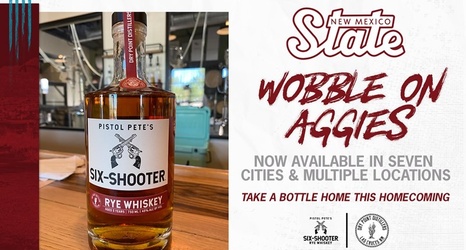 LAS CRUCES, N.M. - The nation's first collegiately-licensed spirit has expanded its range throughout the state of New Mexico.

Pistol Pete's 1888 Six-Shooter, a rye whiskey launched in November of 2020 as a result of a collaboration between NM State athletics and Dry Point Distillers, has become one of the most popular consumables of Aggie fans everywhere and the spirit is now available at nearly 70 locations across seven cities in the state of New Mexico.

Owned and operated by NM State alumni Chris Schafer, Dry Point Distillers began distributing Pistol Pete's Six-Shooter in a select few locations in the city of Las Cruces at the time of its launch.