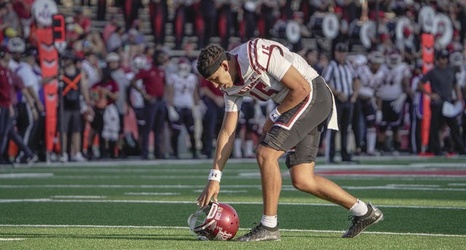 All things considered, Doug Martin could not be too disappointed late Saturday night.

Yes, his New Mexico State Aggies came up on the short end of a 34-25 score in an entertaining Rio Grande Rivalry football battle at University Stadium. But the Aggies’ coach had to acknowledge how close his team game came without its entire arsenal.

Starting quarterback Jonah Johnson left with a wrist injury after passing for just 33 yards. Second-stringer Weston Eget is out with a knee injury and didn’t dress for Saturday’s game.

Enter sophomore walk-on Dino Maldonado, who joined NMSU’s program during the summer and was thrown to the Lobos in an emergency situation Saturday night.