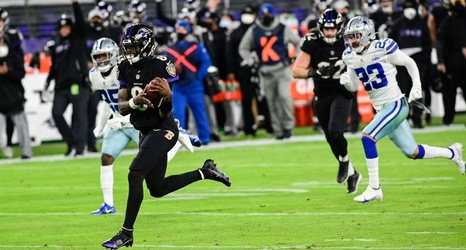 BALTIMORE -- Lamar Jackson didn't just come back from testing positive to keep the Baltimore Ravens in the AFC playoff race.

Two days after coming off the reserve/COVID-19 list, Jackson resembled one of the most dangerous players in the league again, running for a 37-yard score and throwing two touchdowns as the Ravens beat the last-place Dallas Cowboys 34-17 on Tuesday night.

In what has been an up-and-down season, Jackson found his stride against the NFL's 23rd-ranked defense, rushing for 94 yards and completing 12 of 17 passes for 107 yards (101.