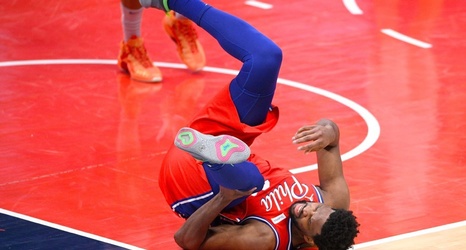 Philadelphia 76ers superstar center Joel Embiid will have an MRI after injuring his left knee in Friday night's 127-101 win over the Washington Wizards, coach Doc Rivers said after the game.

Embiid hyperextended the knee after coming down off a dunk in the third quarter, sources told ESPN's Adrian Wojnarowski.

Embiid was in the midst of the latest dominant performance of his MVP-caliber season, scoring 23 points on 8-for-11 shooting to go along with 7 rebounds, 3 assists and 2 blocks in 20 minutes, when he caught a pass from Tobias Harris and flew in for a dunk to give Philadelphia an 80-60 lead with 6 minutes, 20 seconds remaining in the third quarter.