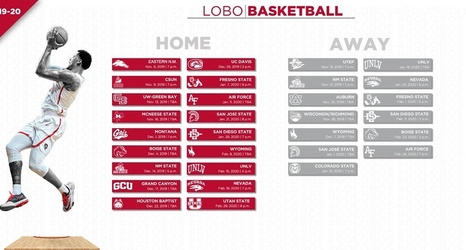 ALBUQUERQUE, N.M. --- The University of New Mexico men's basketball program officially announced its full schedule for the 2019-20 season on Thursday. The competitive schedule is highlighted by 18 home contests, the most in a decade for the Lobos, along with 13 road games, including a trip to Brooklyn, N.Y. to take on 2019 Final Four participant Auburn in November.

Of the 18 conference contests on the 2019-20 slate, 16 will be broadcast via either ESPN2, ESPNU, CBS Sports Network, AT&T SportsNet or STADIUM.

"This schedule has shaped up to possibly be the strongest non-conference Lobo men's basketball schedule since 2013-14," head coach Paul Weir said.