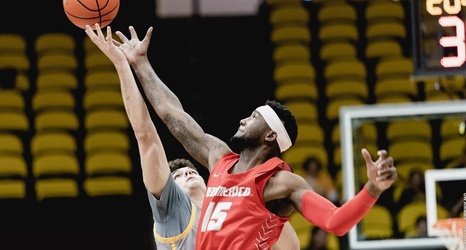 LARAMIE, WYO. --- For the third time in the last four contests, The University of New Mexico men's basketball team (9-2, 2-0 MW) held its opponent to less than 30 points in the first half on Saturday afternoon and used the 11-point halftime advantage to claim a 14-point victory over the Wyoming Cowboys (3-7, 0-2 MW) on Saturday afternoon. UNM topped Wyoming 79-65 as redshirt-senior registered his third double-double of the season, his second in the last three games.

Senior led the Lobo scoring effort with 18 points to go along with seven rebounds while redshirt-junior nearly posted a triple double on the day with eight points, 10 rebounds and nine assists.