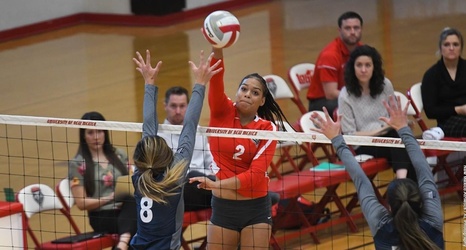 ALBUQUERQUE, N.M.— The University of New Mexico volleyball team was in control for most of the Mountain West match on Saturday afternoon at the Johnson Center as the Lobos swept the Nevada Wolf Pack 25-19, 25-17, 25-21 to earn the season sweep.

In addition, it was UNM's second-straight win and fourth in five matches as the Lobos picked up their 10th win of the season to improve to 10-18, 5-11 in conference. Furthermore, the sweep is also UNM's first sweep since Sept. 14 when the Lobos won in three at Seattle, and is the fourth-straight match that the Lobos have defeated Nevada.