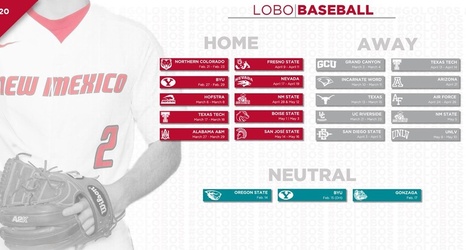 ALBUQUERQUE, N.M. – The University of New Mexico head baseball coach Ray Birmingham has officially announced his team's 2020 schedule. As in year's past as the skipper of the Lobos, a Birmingham schedule will once again mean the Lobos will take on some of the nation's best, both at home and on the road.
2020 UNM BASEBALL SCHEDULE
Collectively, UNM's opponents won 561 games a year ago with 11 winning 30 or more games. Three future foes in Fresno State, Oregon State and Texas Tech advanced to a NCAA Regional last season.