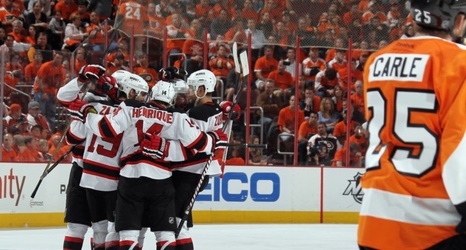 Ilya Kovalchuk #17 of the New Jersey Devils celebrates his powerplay goal at 5:00 of the third period against the Philadelphia Flyers in Game Five of the Eastern Conference Semifinals during the 2012 NHL Stanley Cup Playoffs at Wells Fargo Center on May 8, 2012 in Philadelphia, Pennsylvania. The Devils defeated the Flyers 3-1 to win the series four games to one. (Photo by Bruce Bennett/Getty Images)

For the past decade, New Jersey Devils fans usually have to reflect during this time of the year. They’ve only seen two playoff berths in the past 10 seasons.