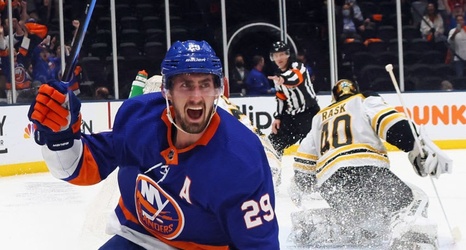 Brock Nelson #29 of the New York Islanders scores against the Boston Bruins at 5:20 of the second period in Game Six of the Second Round of the 2021 NHL Stanley Cup Playoffs at the Nassau Coliseum on June 09, 2021 in Uniondale, New York. (Photo by Bruce Bennett/Getty Images)

The New Jersey Devils had a lot of reasons to watch the Stanley Cup Playoffs. Despite what Tom Fitzgerald says, it has nothing to do with rooting for the New York Islanders despite the team being half former Devils. Actually, the Devils and their fans should have been rooting against the Islanders.