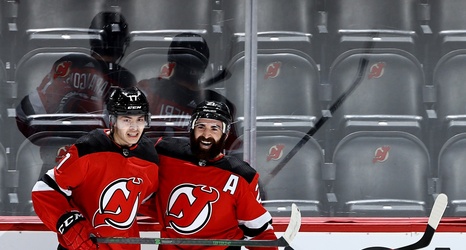 BOSTON, MASSACHUSETTS - MARCH 30: Kyle Palmieri #21 of the New Jersey Devils celebrates with Ryan Murray #22, Janne Kuokkanen #59 and Jack Hughes #86 after scoring a goal against the Boston Bruins during the second period at TD Garden on March 30, 2021 in Boston, Massachusetts. (Photo by Maddie Meyer/Getty Images)

The New Jersey Devils are in sell mode. That became more than clear after blowing a two-goal lead on Tuesday night that turned a possible seven-point deficit in the standings into a 10-point deficit. It’s only three points, but at this point of the season, it’s the difference between “holding on to hope” and “looking towards the future”.