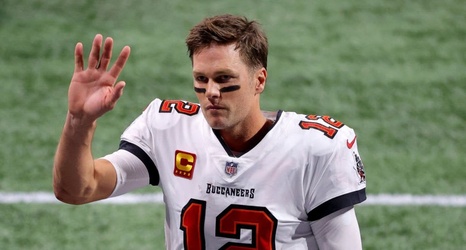 ATLANTA, GEORGIA - DECEMBER 20: Tom Brady #12 of the Tampa Bay Buccaneers waves after defeating the Atlanta Falcons in the game at Mercedes-Benz Stadium on December 20, 2020 in Atlanta, Georgia. (Photo by Kevin C. Cox/Getty Images)

Fans in New England can speak to how difficult it’s been adjusting to a world in which Tom Brady doesn’t play for the Patriots. Not only did they struggle in his absence, but he proceeded to set the league on fire in his debut campaign with the Buccaneers, ranking third in passing yards (4,633) and second in touchdowns (40) before winning his first-round playoff matchup.