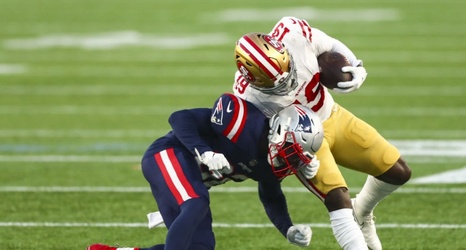 FOXBOROUGH, MASSACHUSETTS - OCTOBER 25: Deebo Samuel #19 of the San Francisco 49ers is tackled with the ball during a game against the New England Patriots on October 25, 2020 in Foxborough, Massachusetts. (Photo by Adam Glanzman/Getty Images)

The Patriots learned first-hand what a mistake passing on Deebo Samuel was on Sunday. N’Keal Harry was not his equal.

When the dust settled on Sunday following an embarrassing 33-6 loss, narratives were strewn about the Gillette turf everywhere you looked.

Cam Newton and Jarrett Stidham combining for a no-show while Tom Brady thrived in Tampa?