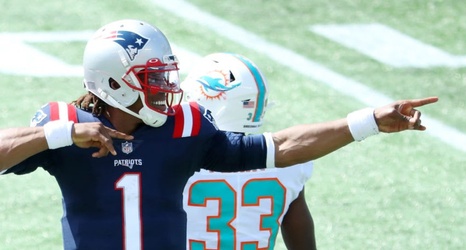 FOXBOROUGH, MASSACHUSETTS - SEPTEMBER 13: Cam Newton #1 of the New England Patriots celebrates during the game against the Miami Dolphins at Gillette Stadium on September 13, 2020 in Foxborough, Massachusetts. (Photo by Maddie Meyer/Getty Images)

Dolphins DE Shaq Lawson clapped back at Cam Newton over his “chain” post on Instagram after Sunday’s game.

For any Patriots fans who were having trouble warming up to the idea of Cam Newton being the team’s starting quarterback, well, we seriously hope that his debut performance on Sunday changed your opinions of him.

Not only did the 31-year-old stud lead the Patriots to a comfortable 21-11 over Miami to open the season, but he was already making enemies with several Dolphins players.