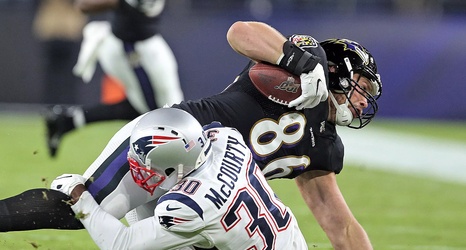 Entering Sunday night, the New England Patriots defense had surrendered just 40 total points over its previous eight games — clearly the best number in the NFL and one reflective of the unit’s overall stellar play. However, New England failed to keep up that defensive pace against a Baltimore Ravens offense that fired on all cylinders and consistently moved the football down the field in front of a home crowd.

When all was said and done the Patriots had surrendered 37 points, with 30 of them coming while the team was on defense. The question now becomes where the unit goes from here, and the answer as usual in New England is forward: talking to reporters after the 37-20 loss — the first all season after the team went unbeaten from opening day through Week 8 — the team’s players pointed out what they can take away from a performance like this.