Patriots: Are refs to blame for Rhamondre Stevenson fumble? 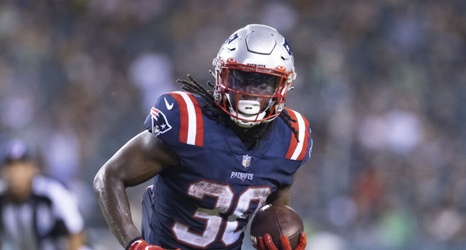 PHILADELPHIA, PA - AUGUST 19: Rhamondre Stevenson #38 of the New England Patriots runs the ball against the Philadelphia Eagles in the second half of the preseason game at Lincoln Financial Field on August 19, 2021 in Philadelphia, Pennsylvania. The Patriots defeated the Eagles 35-0. (Photo by Mitchell Leff/Getty Images)

We know moral victories aren’t everyone’s cup of tea, but there was a lot to like from the Patriots’ Week 1 loss to the Dolphins.

Mac Jones looked as good as advertised after he won the quarterback competition. The defense, meanwhile, got off the field on third down and limited the Dolphins to just 17 points and 259 yards of total offense.