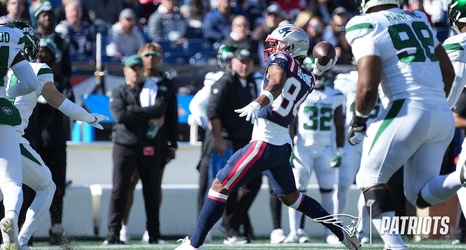 Last season, it was Jakobi Meyers throwing two touchdowns as the Patriots continued to expand their use of trick plays to provide the offense with a spark. This year, against the Jets, it was a first-drive weapon with Kendrick Bourne throwing a touchdown pass to Nelson Agholor to give the Pats an early lead.

These kinds of plays have always been lurking in Josh McDaniels' playbook. From 2007's Brady-to-Moss-to-Brady-to-Gaffney against the Steelers to the Edelman-to-Amendola strike in the 2014 Divisional Roundn vs. Baltimore, the Patriots' long-time offensive coordinator has had plenty of success with unconventional plays.

On Tuesday, McDaniels explained how these plays come together.