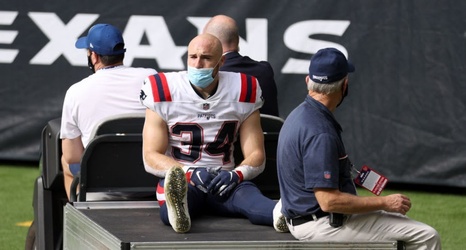 HOUSTON, TEXAS - NOVEMBER 22: Rex Burkhead #34 of the New England Patriots is carted off the field following an injury in the third quarter during their game against the Houston Texans at NRG Stadium on November 22, 2020 in Houston, Texas. (Photo by Carmen Mandato/Getty Images)

The New England Patriots were reportedly interested in adding another running back to the rotation in free agency.

When the dust settled, however, either the player they wanted was scooped up or it was all just a smokescreen to throw off other teams.

As things stand, the Patriots have Sony Michel, Damien Harris, James White (who re-signed this offseason), and 2020 opt out Brandon Bolden under contract for next season.