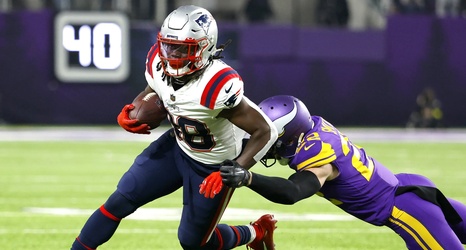 Patriots head coach Bill Belichick has lofted heavy praise towards second-year running back Rhamondre Stevenson this season. Belichick is already on record saying he loves Stevenson, but has now compared him to two all-time football greats.

During the broadcast of the Patriots’ Thanksgiving game against the Minnesota Vikings, NBC’s Jason Garrett shared the major compliment Belichick gave his back during their production meeting.

“It was incredible. He went on and on and on,” Garrett said. “And Coach doesn’t speak a lot in those production meetings, but he probably talked about Rhamondre for 15 minutes, and he compared his growth and his development in a short period of time to both Tom Brady and to Lawrence Taylor.