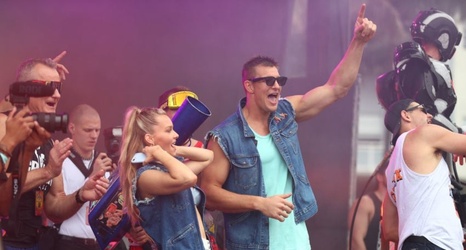 Social media buzzed when Sports Illustrated’s Charlotte Wilder posted a picture on Twitter of Bill Belichick and his girlfriend, Linda Holliday, making an appearance at the “Gronk Beach” party on Saturday in Miami.

Belichick wore a multi-colored dress shirt with white shorts and rocked one of his six Super Bowl rings on his right hand.

They say a picture is worth a thousand words, but Bill Belichick at Gronk’s beach party is at least 150k pic.twitter.com/CwNwkJbGO4