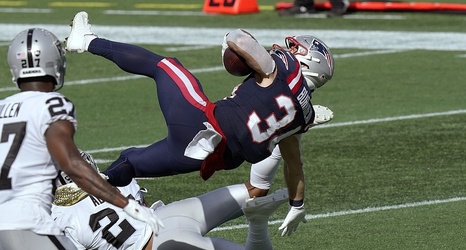 FOXBOROUGH, Mass. -- Rex Burkhead can't remember the last time he scored three touchdowns in a game. But he said every time he reached the end zone Sunday was for James White.

Burkhead had two rushing touchdowns and a receiving score, and Bill Belichick joined George Halas (318) and Don Shula (328) as the only coaches in NFL history to reach 275 regular-season victories in the New England Patriots' 36-20 victory over the Las Vegas Raiders.

"We tried to go out there and play for him," Burkhead said of White, who missed his second consecutive game after his father, Tyrone, was killed in a car accident.