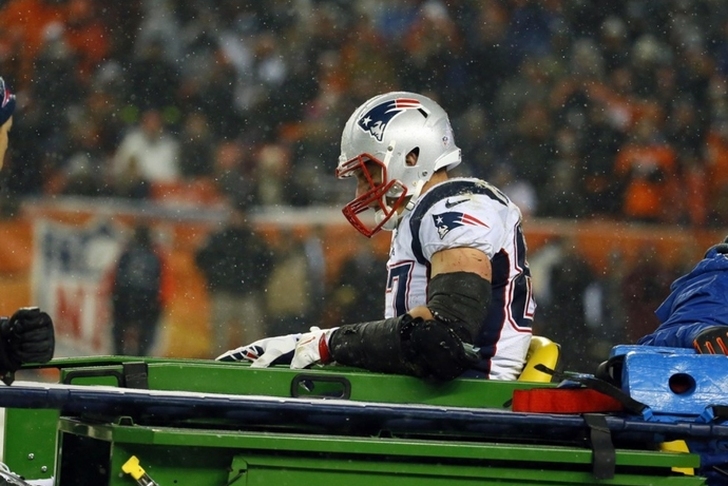 The New England Patriots could be without Tom Brady's best weapon for several weeks. TE Rob Gronkowski was injured in the team's overtime loss against the Denver Broncos Sunday Night.

While Gronkowski avoided any tears in his right knee when he was undercut by a Bronco defender in the process of trying to make a catch, he will miss some time.

First reported by ESPN's Adam Schefter, Gronkowski is unlikely to play against the Philadelphia Eagles this Sunday. It's a pain tolerance issue for Gronk, as he battles a knee bruise. He was in obvious pain after getting hurt and had to be carted off the field.

Gronkowski was having a great season for New England. He had caught 57 passes for 931 yards and 9 TDs in the 11 games he'd played.

With Gronkowski out, backup TE Scott Chandler will have an increased role. So far this season, Chandler has caught 19 passes for 198 yards and three scores.  New England also has Asante Cleveland and Michael Williams on the roster. Cleveland caught one pass for one yard against the Broncos. Williams has caught two passes for 19 yards.

Gronkowski is just the latest in a long list of injuries for the Patriots. RB Dion Lewis was lost for the season, WR Julian Edelman could miss the rest of the regular season and WR Danny Amendola didn't play against Denver.