Patriots Draft Rumors: New England To Trade Either Garoppolo Or Butler For 1st Round Pick? 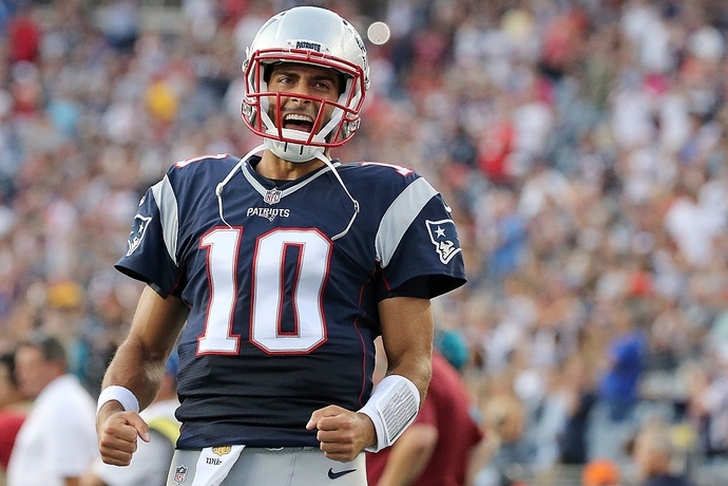 The New England Patriots do not have a first- or second-round pick in the upcoming NFL Draft, but with the uncertain futures of quarterback Jimmy Garoppolo and cornerback Malcolm Butler - both players the Patriots have placed on the trade block - they have a big chance to be a factor in the early rounds, according to USA Today's Chris D'Amico:

The reasons are backup quarterback Jimmy Garoppolo and cornerback Malcolm Butler. Their future homes will loom as large over the first round as those of any of the top draft prospects.

Garoppolo is the most intriguing. The feeling from reports out of New England – though does anybody really know what Bill Belichick is thinking? – is they will not trade him. We all want to be Tom Brady, but he is 39 and, no matter how much organic food he eats, that increases the likelihood he could be injured.

Butler, the hero of the Super Bowl win over Seattle three years ago, is a bit more complicated. But not really. He is a restricted free agent, so any team that signs him must give the Patriots a first-round pick if New England chooses not to match it. The Saints have shown interest, but would they really give up the 11th pick in the first round? More likely, Butler signs his offer sheet with the Patriots and then they work out a trade with the Saints for New Orleans’ second pick in the first round – at No. 32.

New Orleans is really the only team that has shown interest in acquiring Butler, who had 63 tackles with four interceptions and 17 pass breakups last season.

The Browns have been the team most linked to Garoppolo, and while they won't trade the No. 1 overall pick, they have plenty of other draft picks and assets that could be the centerpieces of a deal. The Texans are also interested in him, but New England is unlikely to trade him to another AFC contender. Garoppolo passed for 496 yards with four touchdowns and no interceptions in two starts this past season.