Can The New England Patriots Continue To Dominate? 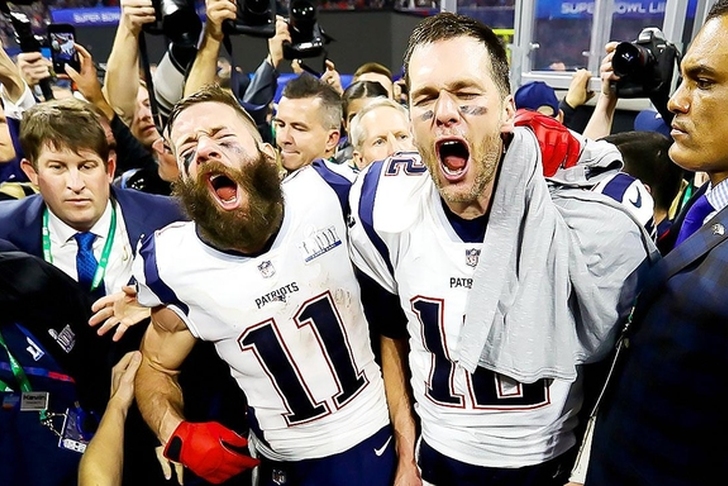 If you’re a member of the New England Patriots, you may have a fair few pinch marks on your skin from where you’ve been checking that it’s not all just a dream. The Patriots are enjoying an immense run of Super Bowl success, having won the title for the sixth time and appeared in title games nine times. Their 13–3 win against the Los Angeles Rams this year was the lowest scoring Super Bowl of all time, but they won’t care too much about that: it was still their greatest winning margin in a Super Bowl title game. They also made history that night by tying the Pittsburgh Steelers as one of the teams to have won the most Super Bowl titles — six.

Some out there might be thinking that a Patriots Super Bowl win — or at the very least, a Super Bowl appearance — is a given, but just what lies behind their success? Is it down to serious investment? Maybe they’ve executed the perfect recruitment strategy? Perhaps it’s a question of both.

The Super Bowl win was their fourth in the last five years. The question is: can they keep it up, and if so, how?

One thing the team has got going for them is, despite all the title wins they’ve chalked up, they’re the underdogs. It’s as if they’ve got nothing to lose, and they love it. If you’ve written the team off, then you do so at your own peril because this lack of faith makes them even hungrier for the title, just to prove others wrong. Many people wrote them off a long time ago, but then the Patriots stepped onto the field against the Kansas City Chiefs and won the AFC Championship Game 37–31, the game that sent them to Super Bowl 2019. These unexpected wins are something the team has developed a habit of producing.

Then there are some of the standout players they have in the team and Tom Brady springs to mind immediately. The veteran quarterback — whose peers voted him the best player of 2018 — was drafted in the sixth round of the 2000 NFL draft and has excelled throughout his time at the club, making all kinds of history in the league. Brady managed over 280 fantasy football points last season, suggesting he is showing no signs of slowing down and a worthy addition to any fantasy football team, despite the price tag that comes with him. 2019’s success means that Brady has now won six Super Bowls, no player has won more. The win also made him the oldest starting quarterback in NFL history to win the title.

Beware of the age factor

Brady may be playing like he’s in his early twenties, but time is far from on his side as far as the game goes. Despite his fabulous form, the quarterback is 41 years old, his career now spans over 20 years, and sooner or later this exertion will start to take its toll. Observers have noted this may already be the case when Brady fumbled a catch during their Super Bowl loss against the Philadelphia Eagles (he was 40 then). The ball bounced off his fingers and out of play.

The team’s star quarterback isn’t the only one who may have been feeling the impact of their years. Rob Gronkowski was another key player in the team and retired earlier this year. The tight end had missed a crucial tackle in the final seconds of a game against the Miami Dolphins in December of 2018. The team went on to score a touchdown they had no business scoring and take the game 34-33. In terms of his days on the field, Gronk may have started to see the beginning of the end when the final whistle went.

Tacticians should be taking careful notes. As older players start to hang up their boots or, like Brady, are still stepping out onto the field but showing signs they’re becoming slightly less sharp or agile in the game, this could be the moment to strike. For all their strong performance, the Patriots will still be feeling the loss of these players. Targeting these players and making them work harder than they’d like to could be the key to victories for other teams.

Is Belichick too old?

Some are questioning whether the head coach, Bill Belichick, is still the man for the job. In 2018, he completed his 44th season as a coach in the NFL and the 2019 season is his 20th as a coach of the Patriots. You could argue there’s no reason for him to step aside. After all, the Super Bowl win against the Rams did make him the oldest coach to win an NFL title, so why should he let someone else take over?

For him to do so would be a major blow to the team. Belichick is a master tactician and was a defense coordinator for the New York Giants, where he won two Super Bowls, before joining the Patriots. Notable successes have included an unbeaten streak at home in 2002 and 2004 and back-to-back Super Bowl wins in 2003 and 2004.

If something isn’t broke, don’t try to fix it, they say, and this could be the key to a Super Bowl title in 2020, though it may not make especially riveting viewing for impartial observers and it could be disappointing for non-Patriots supporters. In the 2019 affair, the Patriots engaged the Rams in a tactical battle which ground them down and held them to those three measly points, living up to their reputation as a team capable of dominating the field position battle and being exceedingly hard to beat.

If Belichick sticks with these tactics, we may see the Patriots lift the Lombardi Trophy in 2020. The opposing team can expect a grueling four quarters, regardless of whether older players are feeling their years or have retired, and they’ll need to get their tactics ready. If there’s one thing they and everyone else should have learned by now, it’s never to count out the Patriots.