UPDATE: Odin Lloyd, Aaron Hernandez and Girlfriends - The Latest in the Saga 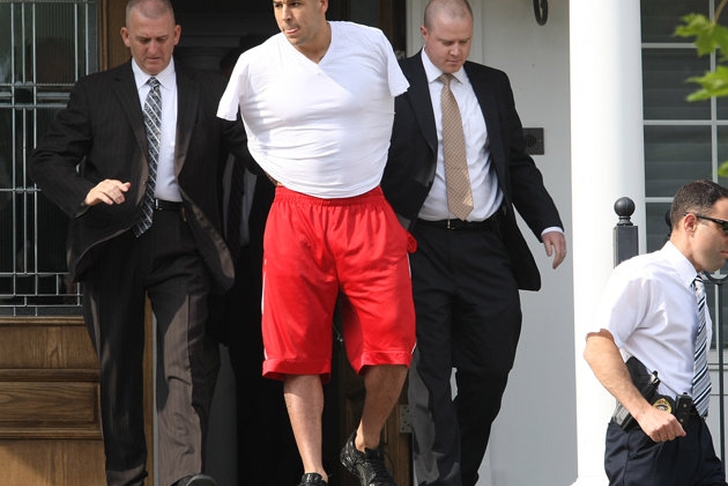 Police searched in a pond in Bristol, Conn. this afternoon looking for the .45-caliber handgun prosecutors believe Aaron Hernandez used to kill Odin Lloyd. Their search has so far yielded no results.

Prosecutors have released still images from surveillance footage of what they claim to be Aaron Hernandez with the murder weapon. The pictures below are various reporters' cell phone pictures of photocopies of the actual pictures, so these are not what will be presented to the jury. Still, there definitely seems to be a gun there.

Update 7/24 1:15 p.m. PST: Well now. According to the Boston Globe, prosecutors are preparing to charge Aaron Hernandez with the shooting deaths of two men in Boston last July. After his arrest for the murder of Odin Lloyd, Hernandez had been rumored to possibly be linked to these deaths, but the trail seemingly died out. The Globe is reporting the prosecution is already making its case to a grand jury, meaning they have narrowed their focus to Hernandez. Said a source to the Globe, “The case against Hernandez appears to be strengthening." Update 7/24 11:30 a.m. PST: Aaron Hernandez appeared in court today, where a judge delayed his probable cause hearing until August 22. He still may be indicted by a grand jury before then. Update 7/18 9:55 p.m. PST: A trading card company has removed Aaron Hernandez from their collection. Update 6/28 11:10 a.m. PST: A third man wanted in connection with the death of Odin Lloyd has been arrested in Florida, according to MyFoxBoston. The Boston Globe first reported this morning that police were searching for Ernest Wallace, 41, an associate of Hernandez and Ortiz. Update: 6/27/2013 2:33 p.m. PST - Hernandez clears waivers, NFL issues statement Aaron Hernandez cleared waivers this afternoon after being released by the New England Patriots following his arrest and subsequent murder charge yesterday. The NFL also released a statement on the matter:

"NFL clubs were advised today that if Aaron Hernandez enters into a player contract prior to the resolution of the charges pending against him, the contract will not be approved or take effect until Commissioner Roger Goodell holds a hearing. The purpose of the hearing would be to determine whether Hernandez should be suspended or face other action prior to the charges being resolved."

Update: 6/27/2013 12:02 p.m. PST - Hernandez denied bail on appeal Aaron Hernandez' has been denied bail by a superior court judge in an appeal hearing Thursday afternoon. Hernandez was first denied bail in his arraignment hearing in district court Wednesday. His defense team argued that he is a homeowner with a fiancée and and 8-month-old child and therefore not a flight risk, and proposed he be kept on house arrest with a monitoring device. But the judge ruled that it was well within Hernandez' means to flee. Update: 6/27/2013 9:45 a.m. PST - Hernandez possible suspect in double homicide More crazy news in the Aaron Hernandez saga, as MyFoxBoston is now reporting that investigators are "looking into" Hernandez in connection to a double homicide last July. From MyFoxBoston:

Furtado and Abreu were sitting in the front seat of the vehicle when witnesses said the occupants of a gray or silver SUV with Rhode Island plates opened fire on it. The surviving victim was in the back seat. Investigators believed two others in the car fled the scene. The source said that investigators were looking into Aaron Hernandez in connection to the killing.

A source for the Boston Globe is saying that Odin Lloyd, the man Hernandez is suspected to have killed last week, may have known about Hernandez' role in the double killing last year, and that could have been Hernandez' motive in this instance. From the Globe:

Related: Aaron Hernandez Suspected in Connection with Double Homicide Cops to search Hernandez home in Boston double-murder probe Report: Hernandez investigated in double murder Update 6/27/2013 8:57 a.m. PST - Second man in custody A second man in connection to the murder of Odin Lloyd has been arrested, multiple outlets are reporting. Carlos Ortiz was arrested in his hometown of Bristol, Conn. but waived extradition to Massachusetts. According to the Hartford Courant, Ortiz had been on probation and had a probation hearing scheduled for Wednesday. He is being held on $1.5 million bail, and like in Hernandez' case, a judge ordered all records be sealed in Ortiz'. Ortiz is not suspected to have been with Hernandez at the time of the killing, but is believed to have been with him later that night. Related: Second Man Arrested in Connection with Aaron Hernandez Murder Case Second man in custody in connection with murder investigation involving Aaron Hernandez Update: 6/26/2013 11:53 a.m. PST - Hernandez charged with murder Aaron Hernandez has been charged with first degree murder, among other charges, in the death of Odin Lloyd.

Hernandez pleaded not guilty and will be held without bail. His next court date is set for July 24. Based on Hernandez text messages and other sources of evidence, including several surveillance videos and audio tapes, the prosecution said Hernandez "orchestrated the execution." They said Hernandez was angry with with Lloyd for taking a group of people to a nightclub the week before who Hernandez did not like. Much of the information from the prosecutors could not have been obtained from just surveillance footage and text messages, indicating that authorities have spoken with someone else involved, possibly one of the other men with Hernandez and Lloyd that night. However, both the prosecution and defense agreed to seal case records.

More reading on reactions to the Aaron Hernandez murder charge

Nine days after the body of Odin Lloyd's body was found a mile from the home of Patriots tight end Aaron Hernandez, and 10 months after signing a major contract extension, Hernandez was arrested this morning at his home on charges yet to be disclosed.

Following the arrest, the Patriots issued the following statement:

A young man was murdered last week and we extend our sympathies to the family and friends who mourn his loss. Words cannot express the disappointment we feel knowing that one of our players was arrested as a result of this investigation. We realize that law enforcement investigations into this matter are ongoing. We support their efforts and respect the process. At this time, we believe this transaction is simply the right thing to do.

Aaron Hernandez Charged With Murder in Death of Odin Lloyd

Aaron Hernandez released by New England Patriots after his arrest

Update 6/21/2013 4 p.m. PST:ABC News is reporting that a warrant has been drawn up fror Hernandez's arrest, but not yet issued.

Both CBS and ABC in Boston are reporting that Hernandez will be arrested for obstruction of justice, which could then lead to more serious charges.

Meanwhile, the Boston Globe is reporting that Hernandez and victim Odin Lloyd were seen together on surveillance video hours before the shooting, and MyFox Boston is saying neighbors of Hernandez heard gunshots between 3 a.m. and 3:30 a.m. on Monday morning.

There is video evidence of Hernandez and two other men wearing hooded sweatshirts walking into Hernandez's home within minutes of neighbors hearing gunshots.

Neighbors say they heard the gunshots between 3 a.m. and 3:30 a.m. Monday morning, but did not report it to police right away.

Original Post 6/20/13:If you haven't been following the ongoing investigation into New England Patriots tight end Aaron Hernandez's potential involvement in a homicide earlier this week, it has turned into an absolute media circus.

Here is what we know: Tuesday evening, Boston Police questioned New England Patriots tight end Aaron Hernandez as part of a homicide investigation. The victim is an "associate" of Hernandez, according to ABC News.

Sports Illustrated reported that Hernandez's home was searched, and while Hernandez himself was not thought to be a suspect, a vehicle rented in his name was made evidence in the investigation. From ABC:

Hernandez was initially uncooperative with police after the body of a 27-year-old man was found in an industrial park not far from the Patriots player's home, two law enforcement sources said.

A rental vehicle with Rhode Island plates was recovered near the scene, which led investigators to Hernandez, sources told ABC News.

The Sun-Chronicle of Attleboro, Mass. first reported the finding of a body on Monday evening. The body turned out to be that of Odin Lloyd, a semi-professional football player in the Boston area who used to date the sister of Hernandez's girlfriend. The Police returned to Hernandez's home Wednesday morning, but no one answered the door. Then, TMZ reported that Hernandez was the defendant in a civil suit for allegedly shooting a man in the face outside a Miami strip club in February. There appears to be no connection between the two incidents, and the civil suit was actually dismissed, but has been re-filed since Tuesday.

Thursday morning, Fox Boston reported that Lloyd and Hernandez - along with two other men - were out at a bar just hours before Lloyd was shot. From MyFoxBoston:

A law enforcement official tells FOX 25 Hernandez appears to be directly tied to the homicide which is why authorities executed a search warrant at his home Tuesday night. According to the same source, Hernandez, Lloyd, and two other men were at a bar in Boston the night of the homicide, and at some point, the four men left together in a car driven by Hernandez which was confirmed by a text Lloyd sent another friend, the source says.

It is unclear where the car went or what happened during the ride, but according to the source only three men returned to Hernandez's home at the end of the night and Lloyd was not one of them.

The MyFoxBoston source also references multiple crime scenes, implying that Lloyd was shot and killed somewhere other then where his body was found. Furthermore, it is unknown if the car that Hernandez was driving that night is the rental car (a 2013 Chevrolet Suburban) than led the investigation to Hernandez in the first place.

Early Thursday afternoon, Sports Illustrated reported that Hernandez is "likely" to be arrested, although "it is not yet known what he will be charged with." Later on Thursday afternoon, law enforcement officials said that Hernandez surrendered his phone to investigators, but only after smashing it to pieces, and that the videos from his surveillance system had all been destroyed.

Stay up-to-the-minute with all your New England Patriots Rumors & Breaking News from around the web.