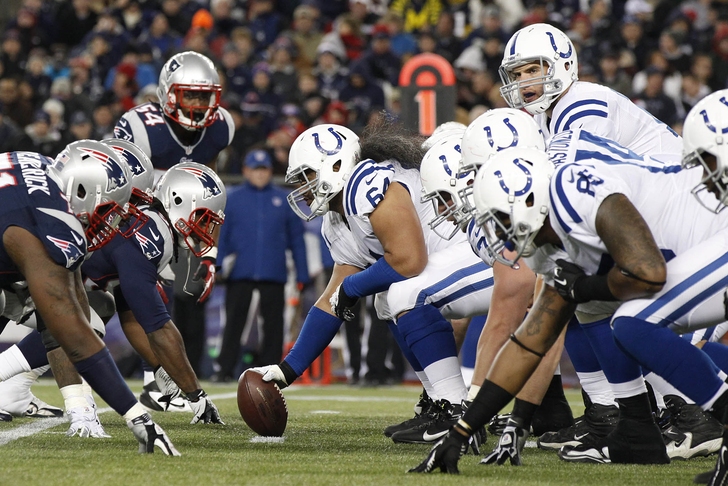 The New England Patriots are getting ready to take on the Indianapolis Colts in Sunday's AFC Championship game...let's take a look at what fans can expect from this showdown between two of the game's top quarterbacks:

The Patriots are coming off a morale-boosting win over the Baltimore Ravens that saw them erase two 14-point leads. Tom Brady has built up real chemistry with his wide receivers - something that was lacking last year - and the Patriots have had no trouble putting points on the board in recent weeks.

On the defensive side of the ball, there are more questions...but the Patriots feel like the Baltimore game was an anomaly. Since New England's bye week in Week 10, only one team - the Green Bay Packers - has scored more than 20 points on the Pats.

No one was too surprised that Indy handled the Bengals in the wild card round, but the Colts' win over Denver definitely raised a few eyebrows. Andrew Luck has been very solid, and he had a good game in Denver despite his two interceptions.

The Colts know that New England is very hard to predict, and the last matchup between these two teams was a perfect example. While Jonas Gray is unlikely to blow them up for four touchdowns this time, they'll definitely be on the lookout for surprises.

At the end of the day, this one will come down to which secondary steps up. We know that these teams both have elite passing attacks, and they've both had a few rough games this year against teams that move the ball well through the air. Whoever can limit the damage the most will end up moving on.

This is a very, very tough game to call, and the Colts have a very real shot of proving us wrong. That said, the Patriots were up against the ropes twice against Baltimore, and both times they dug deep and made big plays when it mattered most. The kind of confidence that comes with that and the veteran guile that makes it possible are the reasons why we're picking New England.