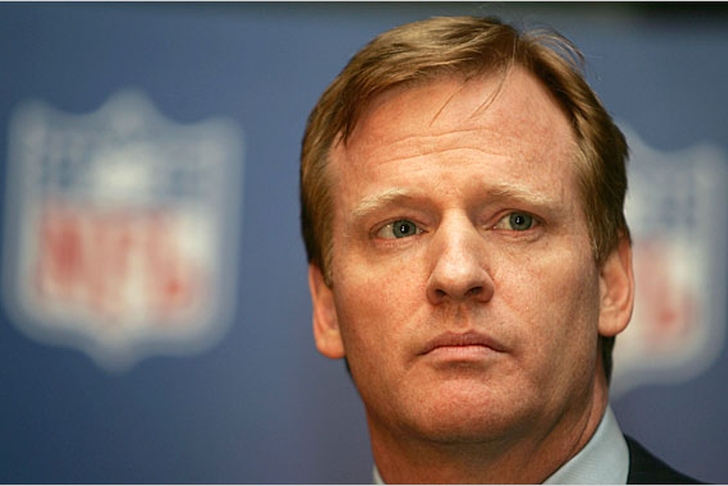 So, Aaron Hernandez happened yesterday. I imagine Roger Goodell was resoundingly unavailable for comment. So good thing I caught up with his twitter parody CaptainTouchback (@CaptTouchback) before all this madness so he could give me some insight on the latest happenings of the league, like the Bengals on Hard Knocks again. SO. BORING.

Anyways, if you're not following CaptainTouchback, you're missing out on some top-quality NFL humor. Some examples:

"The Hernandez situation is a legal matter so I have no comment. However, we will be leaking info thru regular channels today. "Roger" that!

Walk on a wire across the Grand Canyon? Try hosting a Super Bowl in New Orleans! That was putting my life on the line. "Roger" that!

The OJ trial was only good for cable news ratings and the sale of Bruno Magli shoes. An Aaron Hernandez trial would be good for ESPN as that will give them a good way to use new analyst Ray Lewis.

You made $29.4 million in “reportable compensation” last year and $11.5 the year before. How do you explain that?

Good point. We do still have some catching up to do for the year before last, don't we?

In the National Football League budget...that would be a rounding error.

Most of all, how in the hell is the NFL considered a non-profit?

It's quite complicated and difficult to understand. Kind of like the tuck rule or the Raiders' draft strategy.

You seem to give pretty big hugs to those draft picks... what do you say to them?

I usually say something like "congratulations" or "I know your family is proud of you" or "you don't have to ask...yes, I am glad to see you".

Will we see the NFL become a touch-football league during your tenure?

I've talked with Rothlisberger and I don't think the league will have any more issues with "touching".

How was Pacman’s speech at the Rookie symposium?

I'm still waiting for the interpreter to finish translating Pacman's speech for me. I'll get back to you in a couple of weeks.

If you need a ref to have a Joey Crawford game, who do you plug in? Hochuli?

We don't have to deal with the "human factor" on something this important. So we have constructed robotic doubles of each of the league's referees. It was part of the new collective bargaining agreement. We can swap them in and out with the real refs anytime. The Bill Leavy one gives us some trouble though. People are starting to catch on because the robot is much more life-like than he is.

I don't have a problem with "Tebowing"... far from it. You see, the whole "Tebowing" thing isn't a religious statement as so many people believe. It's really paying tribute to me. Take a knee...touchback!

Do you enjoy increasing American suicide rates by moving the draft back a month so ESPN can talk about it THAT much more?

What would you rather talk about then? Baseball games getting cancelled due to snow? NBA teams throwing games to improve their potential draft position? The WNBA draft? We could all use one more month of NFL Draft Talk. Plus for the people who sculpt and spackle Mel Kiper's hair, it means one more month of employment. So it helps the economy.

Beyonce was a disappointment. I made it known that I would be available to sing "Crazy in Love" with her and I never got called up on stage. Nik Wallenda would be great, but the support cables for the overhead cameras don't even hold up the cameras very well, let alone a full-grown crazy person. Actually, we may have a halftime act with local New Jersey ties. I can't give away anything, but the band's name rhymes with "Jon Bovi".

The Bengals on Hard Knocks again? Was this just to save us from having to see the Jets again?

There are only so many Sanchez interceptions during 7-on-7 drills that a person can watch. So the Jets were not in consideration. We talked about finding a team that did things the right way. A team whose organization stood for honor, experience and integrity. A team whose players represented all that is good and noble about the National Football League. Then, at the last minute, we decided to go the other way and landed on the Bengals.

Check out The Dean's List everyday to see more stories like this from all over the web.