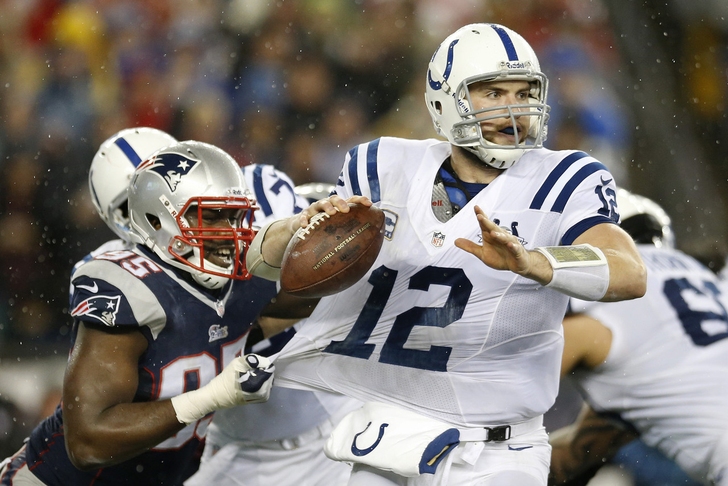 The New England Patriots got a well-deserved rest this weekend, watching other teams go to work on their bye while keeping an active five-game win streak firmly in hand.

However, while the players were enjoying their time off, head coach Bill Belichick got back to work on Sunday to start preparations for next Sunday night's tall task against Andrew Luck and the Indianapolis Colts.

“He’s big like [Pittsburgh’s Ben] Roethlisberger is big, so he’s hard to get down,” Belichick said of Luck on a midday conference call, via Shalise Manza Young of the Boston Globe. “Even when you get him, you get ahold of him, or you get a chance to hit him, he’s got good balance, real good playing strength. He can stand in there and throw the ball with guys hanging on him."

Standing at 6'4" with 240 pounds of bulk on his frame, Luck does a fair amount of his work from the pocket. However, he still has the moves to escape pressure and do damage on the run.

“But he’s fast, he can run out of the pocket, break tackles. [It’s] pretty close to you have to treat him like a running back,” Belichick observed.

Lucks has 35 carries on the year for 129 yards and two touchdowns.