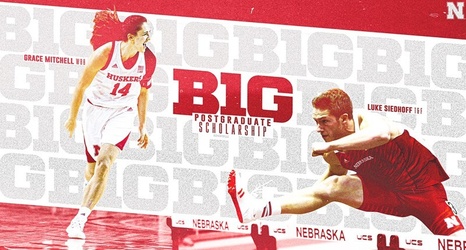 Nebraska's Male Student-Athlete of the Year Luke Siedhoff (track and field) and Grace Mitchell (women's basketball) have been selected as recipients of 2020 Big Ten Conference Postgraduate Scholarships, the University of Nebraska Athletic Department announced on Friday, May 1.

Two student-athletes who plan to continue their educations in graduate degree programs from each of the 14 Big Ten institutions were awarded $7,500 scholarships through the conference, based primarily on academic achievements.

Siedhoff, a senior from Crete, Neb., earned his second major academic honor of the week following his Male Student-Athlete-of-the-Year award at Nebraska's virtual "Night at the Lied" (April 28).