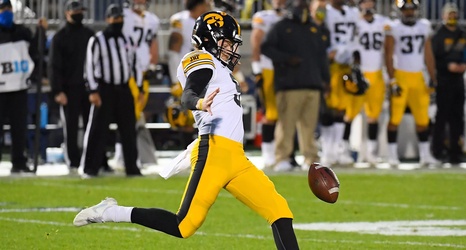 The Hawkeyes started the 2020 season 0-2 after losing second half leads to Purdue and Northwestern. The Hawkeyes were driving deep into Purdue territory when the Boilermakers forced a Mekhi Sargeant turnover. A twelve play touchdown drive gave Purdue the 24-20 victory. Against Northwestern, the Hawkeyes blew a 17-0 first quarter lead with three Spencer Petras interceptions as the Wildcats defeated Iowa 21-20. But Iowa turned their season around with back-to-back blowout victories over hapless Michigan State (49-7) and Minnesota (35-7). Last week, Iowa scored 28 unanswered points in the second and third quarters enroute to a 41-21 victory over still-winless Penn State.