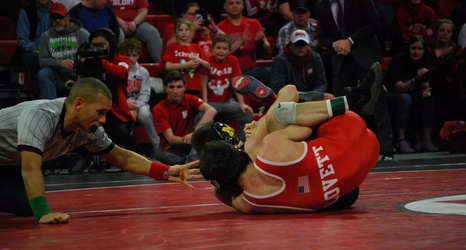 The Nebraska wrestling team brought five wrestlers to Omaha to compete in the UWW Junior and U23 Nationals this past weekend.

And the Huskers brought some impressive hardware back home with them, as sophomore-to-be Ridge Lovett earned the Junior National Championship in freestyle at 61 kg.

Throughout most of the tournament, Lovett was a man among boys. Coming in sporting the cornrows hairdo, the Husker sophomore went 3-0 on Saturday with all three wins being 10-0 tech falls. Throughout those three wins, Lovett was only on the mat for 6 minutes, 1 second.

In Suday’s quarterfinal against Carter Young, Lovett gave up his first points of the tournament when Young took a 4-1 lead behind two early takedowns.