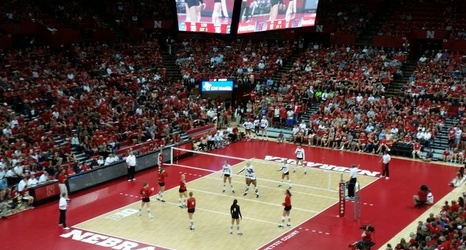 It's pretty incredible that we can get more fans for the preseason scrimmage than many programs get at an average home match, but that was the case in the Bob Devaney Sports Center on Saturday night. On a night where severe weather threatened, fans still filled levels A and B, with a good part of level C occupied as well.

The most noticeable upgrade to Devaney in the offseason was the video board hanging above the court. As the red and white teams warmed up, cameras flashed through the crowd, giving nearly everyone their 15 seconds (or so) of fame.