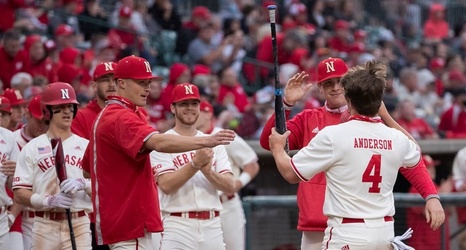 Bloomington, Ind. – The Nebraska baseball team kicked off its four-game trip to Bart Kaufman Field with a 8-5 win over the #25 Indiana Hoosiers on Friday night in front of a nationwide audience on BTN. The Huskers remain in first place in the Big Ten and extended their lead over both the Hoosiers and Michigan Wolverines, as Michigan dropped its series opener in extra inning to Maryland.

Freshman Max Anderson produced his third-straight game with at least three hits, as he went 3-for-5 with a home run and two RBIs. Fellow freshman Brice Matthews drove in three runs with a double and Spencer Schwellenbach added his sixth home run of the season.