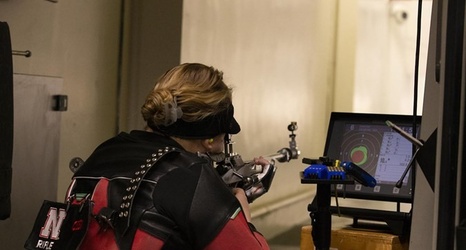 Lexington, Va.- The Nebraska Rifle team continued its win streak against the Virginia Military Institute on Sunday, posting a score of 4,689-4,523 to move to 5-0 on the season.

The Huskers took the top five spots overall in the match. Sophomores Madelynn Erickson and Cecelia Ossi took first and second, posting aggregates of 1,177. They were followed by Elena Flake in third (1,163), Kinga Aletto in fourth (1,145) and Mackenzie Strauch in fifth (1,144).

Head Coach Mindy Miles has been seeing improvements in her team as the season continues.