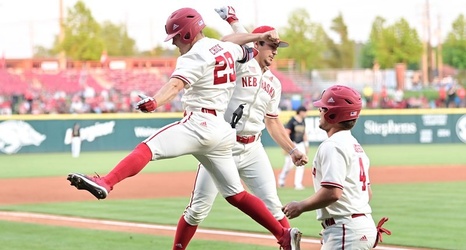 Fayetteville, Ark. – Trailing 4-0 after the third inning, the Nebraska baseball team rallied for a 8-6 win over the Northeastern Huskies in the first round of the NCAA Fayetteville Regional on Friday night at Baum-Walker Stadium. The Huskers now play the No. 1 overall seed Arkansas Razorbacks on Saturday night at 8 PM.

The Huskers handed the Huskies just their third loss of the year when they score first. Northeastern entered the game with a 28-2 record when scoring the game's first run.

Nebraska's offense got rolling in the fourth on a two-out, three-run home run from Cam Chick.