After historically poor night, Husker hoops gets back to work as season begins to wind down 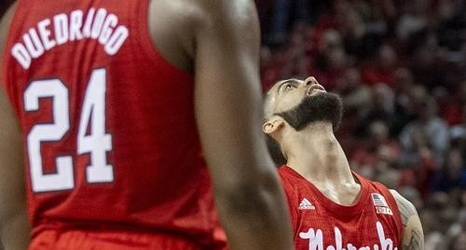 Nebraska guard Haanif Cheatham (22) shows frustration after missing a free throw in the second half against Northwestern as teammate Yvan Ouedraogo (24) looks on Sunday at Pinnacle Bank Arena. Cheatham and Ouedraogo were part of a Huskers group of players that went 8-for-30 from the free-throw line in a 81-76 loss to the Wildcats.

This is a little different from Sunday against Northwestern. He's not standing alone at the free-throw line at Pinnacle Bank Arena with 15,000 people staring down at him who already know in their hearts what's coming. He's on a side basket in the Hendricks Training Complex on Wednesday after practice, shooting, shooting, shooting.