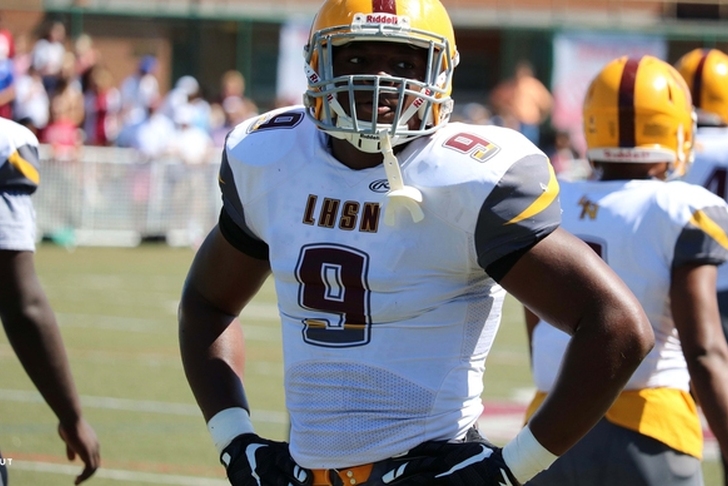 There aren't any actual Nebraska Cornhuskers football games until the fall, which means recruiting takes center stage for Mike Riley and his coaching staff. Nebraska is off to a hot start, ranking sixth in the nation with 11 commitments. But the Huskers aren't done yet and they'll continue to bring top talent to Lincoln. Here are all the latest on Nebraska Football Recruiting you need to know.

Nebraska makes top group for 4-star DE
Four-star defensive end Ronnie Perkins (St. Louis, MO) announced his top 12 schools on Twitter, and Nebraska was one that made the cut.

Oklahoma is considered the heavy favorite for Perkins, but Nebraska hasn't gone all in on him yet, as he is third on their board at the position.

The 6-foot-4, 250-pounder is ranked as the No. 7 weak-side defensive end and No. 136 overall prospect in the country, according to 247sports' Composite Rankings.

Huskers also near top for 3-star DE
Nebraska has three-star defensive end Daniel Carson (Independence, MO) as their top defensive end target - ahead of Perkins - and he announced on Twitter that they made his top 11 schools.

The Huskers are considered one of the three favorites for Carson, along with Ohio State and Oklahoma.

The 6-foot-5, 260-pounder is ranked as the No. 19 strong-side defensive and No. 504 overall prospect in the country, according to 247sports' Composite Rankings.

4-star ATH "all in" on Nebraska
Chase Williams, a four-star athlete from Corona, CA, committed to Nebraska in April, and despite other schools still pursuing him, he is "all in" on the Huskers.

“When I got up there I already had a good relationship with the coaches,” he said, via 247sports. “So everything at Nebraska was just comfortable. It felt like a place that I wouldn’t be homesick. I didn’t have doubts about Nebraska. I knew the people there would be pushing and motivating me. That's a big part of it.

Williams plays both wide receiver and cornerback, but chose the Huskers because they allowed him to play cornerback.

“That’s what I want to do,” he said. “I had a choice and I picked cornerback. My play at corner, my size, my ability to go up for the ball and my playmaking skills.”

The 6-foot-1, 190-pounder is ranked as the No. 35 wide receiver and No. 181 overall prospect in the country, according to 247sports' Composite Rankings (they rank him as a wide receiver instead of cornerback).

Follow our Nebraska Cornhuskers team page for all the latest on Nebraska football recruiting or download the Chat Sports App!