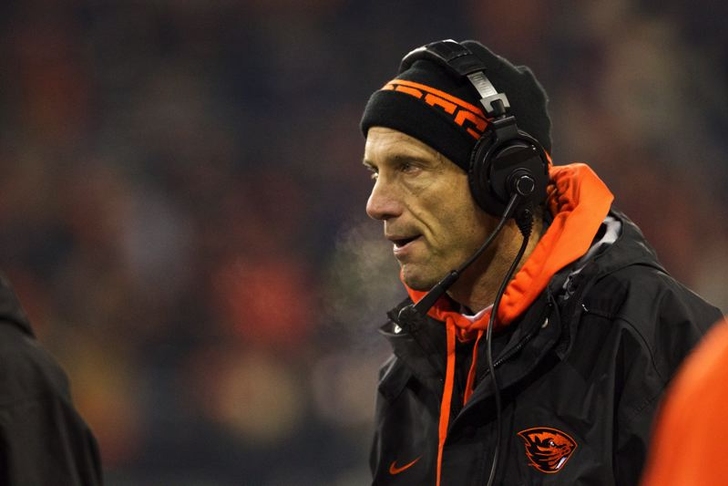 Mike Riley's hire certainly came out of left field - many Nebraska fans had never even heard of the former Oregon State HC. Here's everything you need to know about the Huskers' new coach...

Riley, 61, was born in Idaho and raised in a football family - his father, Bud Riley, was an assistant in college and the CFL. When his father was hired as an Oregon State assistant, the young Riley moved to Corvallis and became a local icon for his exploits as a high school football star.

Riley attended the University of Alabama, where he played cornerback for Bear Bryant's Crimson Tide. Riley didn't see much action on the field, but knew he wanted to stay in football - like his father, he turned to coaching shortly after graduation. Riley's first job was with California, where he was a graduate assistant for the Golden Bears, and after a series of assistant jobs in college and the CFL, he became the Canadian Football League's youngest ever head coach in 1987.

Riley's Winnipeg Blue Bombers won two Grey Cups (CFL championships) in his three years with the team, but he left for a head coaching job in the now-defunct World League of American Football (WLAF), which was the precursor to NFL Europe.

When the WLAF job flamed out, Riley took a job with a CFL expansion team in San Antonio (the CFL had an ill-fated expansion attempt into the United States in the mid-90's), but the franchise folded before he could coach his first game.

Riley then returned to the American college ranks, becoming USC's offensive coordinator and quarterbacks coach in 1993. The Trojans found tremendous success in Riley's time as OC/QB coach, and in 1997 he was hired by Oregon State.

Riley's recruiting aptitude and creative schemes helped turn around what had been one of the nation's worst football programs, and while he only went 8-14 in his first two seasons, he earned major recognition in coaching circles. The San Diego Chargers were one of many teams to take notice, and in 1999 they offered Riley their head coaching job.

The year after Riley's departure, Oregon State ended their 28-year streak of losing seasons, and the Chargers went 8-8. Unfortunately for Riley, their next season finished 1-15, and a 5-11 campaign in 2001 wasn't enough to save his job.

In 2002, Riley was offered the Alabama job and was under consideration for the UCLA job as well, but he ultimately chose to return to Oregon State to finish what he started. Since his return, the Beavers have an overall record of 85-66. The Beavers have appeared in eight bowl games, winning six. His best finish came in 2008, when the Beavers ended the year with a Sun Bowl victory and a #18 ranking in the AP Poll.

Riley's teams play a modified version of the West Coast offense, and players constantly shift formations and use motion to keep defenses guessing. Oregon State offenses are routinely among the nation's best, but the Beavers haven't been as successful on defense during his time in Corvallis. Riley is beloved by players and former colleagues, and while he's never taken a team to the highest level, he commands incredible respect from his team.

What Can Fans Expect?

Riley has no experience in or ties to the Big 10, and it'll be interesting to see how this effects Nebraska's recruiting out of the gate. The Huskers expect to lose Ameer Abdullah to the NFL draft, but Riley has been excellent at developing and making the most of the talent he has available. Brandin Cooks was a three-star recruit coming into Corvallis, but won the Biletnikoff Award and was a consensus All-American his senior year.

This hire will not make the fans happy - that much is already clear - but the number of fellow coaches and football analysts praising the move is at least worth noting. Riley won't have an easy time winning over the fans in Nebraska, but this is a creative, audacious hire by the Huskers.