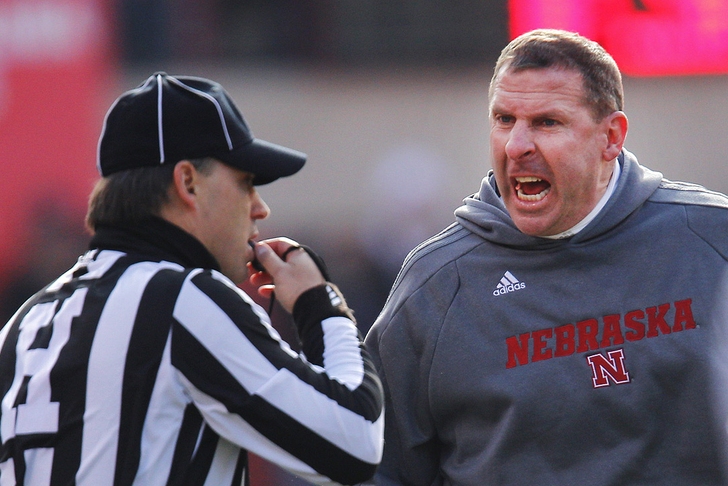 Now the head coach at Youngstown State, Pelini was fired after a successful run at Nebraska that ultimately wasn't successful enough to placate his bosses. In his final meeting with his Nebraska team on December 2nd, Pelini reportedly unloaded on Eichorst, letting the team know just how he felt about his former AD. Per Omaha.com:

“A guy like (Eichorst) who has no integrity, he doesn’t even understand what a core value is," Pelini said. "And he hasn’t understood it from the day he got here. I saw it when I first met with the guy.

“I said to (assistant coach Rick Kaczenski) at one point, I said this job is killing me. I said I don't want to die doing this job. I meant it. I was like, I don't want to have a heart attack on this job.”

“He goes, I disagree that I haven't supported you. I said, 'Hey bud, you can't support someone under a f****** rock.' I said, to do your job at this level, in a place like this, you gotta be a grown-ass f****** man...to lead something. I said you can't lead anything under a f****** rock. I said you don't spend any time with us. Our players don't even know who you are. That isn't leadership.

“I don't even know what [the Nebraska Board of Regents] really do. And I said ‘Hey, if (Eichorst) isn't gonna do his job, if he doesn't have the balls to go out there and support me, to support these kids, support this program, do me a favor and get rid of me.’"

Pelini described the scene on the night of his firing:

“I am sure you guys walked out of there and you’re all smart guys who have been around. I’m sure your gut told you certain things. Trust your gut, because your gut is right.

“Not knowing how it was going to go, when he told me he was going to meet with you guys at 8 p.m., my first thought was, well, that ain’t gonna go real well. Because I knew he wouldn’t handle it the right way.

“I heard he brought security in with him. C’mon man. S*** fellas, look at who he surrounds himself with. Look at his team of people. C’mon, man.

“I’d rather f****** work at McDonald’s than work with some of those guys. Not that there is anything bad about working at McDonald’s.

“It is a b**** here. It is hard enough when you have the negativity that comes from the media and the negativity from a lot of former players, this talk show and that talk show, you win and it ain’t good enough. It’s not good enough how you won. There is a lot of things that go on there and if you don’t have a grown man staying in front of the thing and getting everybody, rallying, I can do all I want, but they’re b****ing at me, too....

“It was never more evident than the Wisconsin game. I thought you guys were more mentally beat in that game than we got physically beat. It’s a culmination of the negativity. I understand, you guys are human. That is why I was constantly talking to you guys about it.

“In the last game, you guys just said f--- it, let’s go play. Despite all the injuries and everything else we had dealt with, you guys at least played free. That is my advice to you guys that come back. You can’t let this place eat you up, because if you let it, it will eat you up.

“If any of you guys have on your mind, hey, should I go or should I stay? At the end of the day, you gotta sit there and think, ‘This is how many years I got left. These ought to be the best of my life. And if I don’t think it’s going to be this way this place, then you shouldn’t stay. But if you feel like, hey, this is the place for me, this is the place I’m going to enjoy my career, then you should stay. That’s what it should come down to.”

UPDATE: Nebraska has responded with a harsh statement of their own