3 Things We Learned From Miami's Win Over Nebraska 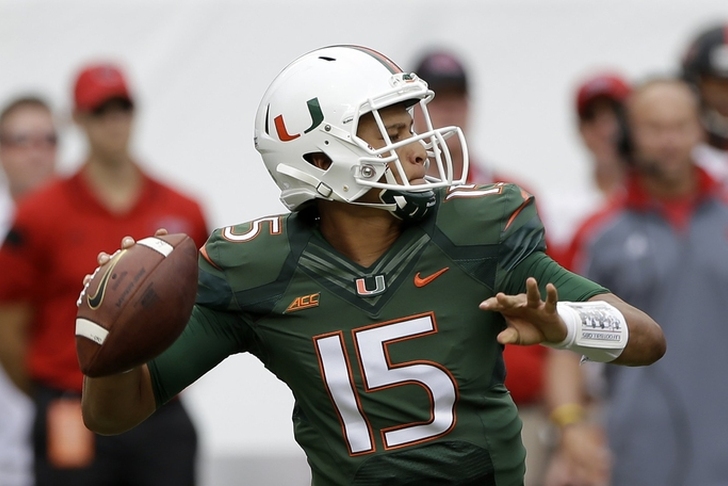 The Nebraska Cornhuskers had a 0.8% chance to defeat the Miami Hurricanes after falling down 33-10 in the 4th on Saturday, per ESPN Stats & Info. They pushed things to overtime in improbable fashion with 23 unanswered points, but a Tommy Armstrong interception on the first play of overtime killed the momentum dead. A Miami field goal finished off the Huskers, 36-33, and leaves us with plenty of head-scratching to do from yet another Miami/Nebraska crazy-fest. Here's 3 Things We Learned From Miami's Win Over Nebraska.

3. Tommy Armstrong Needs To Keep His Head Up

Armstrong was held down in the first three quarters of Saturday's game, but he went full Madden cheat code on the Canes to lead the Cornhuskers to an improbable tie at the end of overtime. Yes, that overtime interception was regrettable at best and indefensible at worst. But, that doesn't take away from Armstrong showing his stripes and lifting Nebraska up from what would have been a majorly disspiriting blowout loss.

2. Brad Kaaya Is Ready For His Close-Up

He's young, has the arm to make all the throws, and he has the intangibles and confidence to carry the Miami Hurricanes on his back. His name is Brad Kaaya and he fully arrived on Saturday. The sophomore sensation is legitimately the best QB in the ACC right now in our opinion, and he's not done. Watch out, America. He's set to be a major breakout star as the weeks go on.

1. Miami Is A Legit ACC Contender

Florida State's offense looked dreadful last year. Georgia Tech couldn't get past a Notre Dame besieged by injuries. There are no clear championship threats sticking out in the rest of the ACC. With Brad Kaaya on their side and a ton of dynamic talent on both sides of the ball, the Canes may legitimately be BACK and destined for the top of the conference standings.