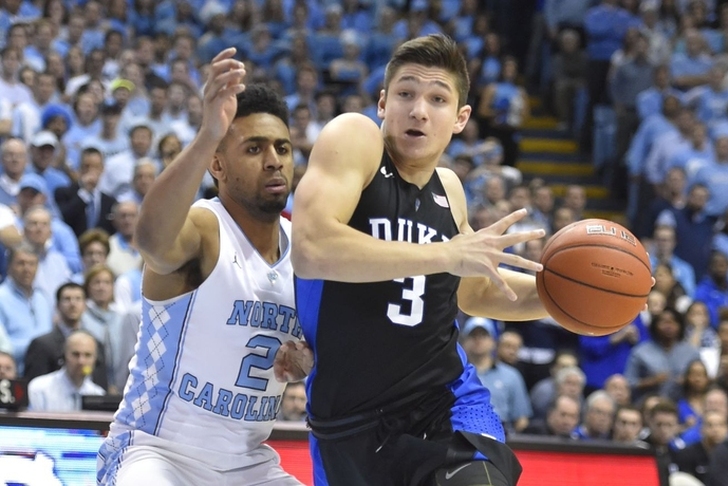 The Villanova Wildcats capped off one of the most dramatic NCAA Tournaments in recent memory in spectacular fashion, using Kris Jenkins' three-pointer at the buzzer to win the national title over the North Carolina Tar Heels. Though the 2015-16 season might be in the books, there's plenty of reason to be excited for next year, thanks to an excellent freshman class and numerous big names returning to school. Here's an early look at next season's college basketball landscape with our Way Too Early Top 25 rankings:

25) Florida State Seminoles
The 'Noles are the kind of off-the-radar team capable of doing a lot of damage next year. Dwayne Bacon (15.8 ppg, 5.8 rpg) and Xavier Rathan-Mayes (11.8 ppg, 4.4 apg) give them one of the best backcourts in the country, and five-star forward Jonathan Isaac will be the third star they need. If Malik Beasley (15.6 ppg) unexpectedly withdraws from the NBA Draft, watch out for Florida State.

24) UCLA Bruins
UCLA had a disastrous 2015-16 season, going 15-17. However, there's reason to believe they'll turn it around in a big way next year. Center Tony Parker is the only player leaving, and the Bruins are welcoming the No. 4 recruiting class in the country, headlined by five-star recruits Lonzo Ball and T.J. Leaf.

23) Dayton Flyers
Dyshawn Pierre is the only contributor leaving the Flyers, giving this 25-win team a strong chance to win the Atlantic 10.

22) Purdue Boilermakers
Caleb Swanigan (10.2 ppg, 8.3 rpg) will be able to adequately replace A.J. Hammons in the middle of Purdue's attack, 7'2" center Isaac Haas (9.8 ppg) will step in nicely into the starting lineup and Vince Edwards (11.3 ppg, 5.4 rpg) will continue to provide some punch from the outside.

21) Gonzaga Bulldogs
Domantas Sabonis will be in the NBA next year and Kyle Wiltjer has graduated, yet the Zags won't take too much of a step back. Przemek Karnowski is expected to return with point guard Josh Perkins, and the No. 12 recruiting class in the country will provide a big boost.

20) Indiana Hoosiers
The Yogi Ferrell era of Indiana basketball is over, but head coach Tom Crean has the players in place to keep this team competitive in the Big Ten. James Blackmon and Troy Williams are two of the most dangerous offensive weapons in the conference, and if Thomas Bryant returns (he's expected to enter the NBA Draft), they could jump into the top 15.

19) Texas A&M Aggies
Stars Danuel House and Jalen Jones will be gone, but Texas A&M will still be extremely well off behind the play of center Tyler Davis.

18) Texas Longhorns
The Longhorns were much better than expected in their first year under head coach Shaka Smart, and they'll be even better next season. Isaiah Taylor (15 ppg, 5 apg) returns, Kerwin Roach has a chance to be the breakout star of the year, and the No. 15 recruiting class will help.

17) Oklahoma Sooners
Losing Buddy Hield will hurt, as will the departures of Isaiah Cousins and Ryan Spangler. That being said, Jordan Woodard and Khadeem Lattin won't let the Sooners lose too much of a step.

16) UConn Huskies
UConn needed a miracle full-court buzzer beater against Cincinnati to make the NCAA Tournament this year - that won't be the case in 2017. Daniel Hamilton, Amida Brimah and Rodney Purvis are all expected to return and will be joined by the No. 5 recruiting class in the country.

15) USC Trojans
USC's rebuild was one year ahead of schedule as they won 21 games last year, and they get everyone back. This team will be very, very dangerous and are a dark horse to win the Pac-12.

14) Seton Hall Pirates
Seton Hall won 25 games and the Big East Tournament with a starting lineup full of five sophomores. Everyone will be back, and star Isaiah Whitehead has the potential to be a dark horse National Player of the Year candidate - assuming he doesn't stay in the NBA Draft pool.

13) Louisville Cardinals
Louisville will be eligible for the NCAA Tournament in 2017, and they plan to make the most of that opportunity. Damion Lee and Trey Lewis, their two leading scorers this year, will be gone, but everyone else is back - including center Mangok Mathiang, who was limited to 10 games last year due to injury.

12) West Virginia Mountaineers
The Mountaineers surprised many with their outstanding season this year - they're not going to sneak up on anybody anymore. Seven of their top nine players return, including star big man Devin Williams.

11) Arizona Wildcats
Arizona's disappointing 2015-16 season has only set the table for what will be one of their most talented teams under Sean Miller. Three starters are gone, but they will be replaced by three five-star freshman commits.

10) Villanova Wildcats
Losing Ryan Arcidiacono and Daniel Ochefu - the winningest senior class in school history - will undoubtedly hurt, but this group will still return three key starters (including hero Kris Jenkins) from this year's team. Throw in five-star center Omari Spellman, and this team will be competing for another national title in 2017.

9) Maryland Terrapins
Maryland's 2015-16 season was very up and down and ultimately fell short of their Final Four expectations, yet that has put them in better position for next season. Star point guard Melo Trimble and big man Diamond Stone will be back and are two favorites to win Big Ten Player of the Year.

7) Oregon Ducks
Oregon's dream season ended just short of the Final Four, but they're poised to repeat as Pac-12 champs in 2017. Replacing two of their top five scorers will be tough, yet Dillon Brooks, Tyler Dorsey and Chris Boucher will have them playing at a high level again next year.

6) Michigan State Spartans
Yes, losing Denzel Valentine is going to be a major blow to this team, but the No. 3 recruiting class in the country should ease those woes. Head coach Tom Izzo will have this group playing at a high level again next year.

5) Kansas Jayhawks
Kansas will be very good next year with Frank Mason and Devonte' Graham leading the way, but they're still in the mix for a pair of uncommitted recruits (Thon Maker, Josh Jackson) that could push KU even higher up the rankings.

4) North Carolina Tar Heels
Despite their loss to Villanova, UNC is poised to put forth another team capable of making the Final Four again next year. Brice Johnson, Marcus Paige and Joel James will all be gone, but top recruits Tony Bradley and Seventh Woods won't let this team miss a beat.

3) Kentucky Wildcats
Kentucky's star backcourt of Tyler Ulis and Jamal Murray will be gone next year, but head coach John Calipari once again has a loaded freshman class coming to Lexington in the fall. De'Aaron Fox, Malik Monk and Bam Adebayo are all names to get familiar with now before they become stars in 2016-17.

2) Xavier Musketeers
Xavier is losing only one starter (James Farr) from this year's team, which claimed a No. 2 seed in the NCAA Tournament. Leading scorer Trevon Bluiett will be one of the preseason favorites to win National Player of the Year, and Edmond Sumner has the potential to be a breakout superstar. They'll be the heavy favorites to win their first Big East title.

1) Duke Blue Devils
Assuming that Grayson Allen doesn't declare for the NBA Draft, the Blue Devils will lose just one starter (Marshall Plumlee) from this year's Sweet 16 team. Center Amile Jefferson will be back after a medical redshirt season, and when you throw in the top recruiting class in the country headlined by the nation's No. 1 recruit in Harry Giles, and this team will open as national title favorites. Coach K's squad has an amazing mix of talent and experience.