Top Most Popular College Football Movies You Must Watch

Fans of football are disappointed that there are not nearly as many football movies as they would like to be able to watch, especially considering how popular the sport is across the world. As many people discovered in the previous year, there are a sufficient number of sports movies to last an entire lockdown, a popular genre. You could find many titles about basketball and football, but the college ones were difficult to find when it came to football. Putting aside movies for a moment, the college football season will start this month, and it is anticipated that it will be one of the most thrilling seasons ever.

The Express
The story in the film "The Express" is both tragic and uplifting. It depicts the narrative of Ernie Davis, a former running back for the Syracuse football team who made history by being the first African American college football player to win the Heisman trophy. It was released before 42, a baseball movie that details Jackie Robinson's difficulties with racial discrimination, and it's in a similar tone because Davis encountered racism throughout his career. Rob Brown portrays Davis, and Dennis Quaid takes on the role of head coach Ben Schwartzwalder. It is quite difficult to see The Express because it focuses on Davis's fight against leukemia; nonetheless, many people consider it among the most motivational football movies ever made. This movie gained popularity just like movie Croupier, which is based on the concept of roulette and gambling.

We Are Marshall
Matthew McConaughey plays the role of coach Jack Lengyel in the film released in 2006. Lengyel is attempting to rebuild a football program following a catastrophic plane disaster in 1970 that claimed the lives of 37 Marshall football players and 75 other persons. We Are Marshall highlights a community centered around a football while highlighting the impact that the crash had on Huntington, the coaches and players who were forced to mourn their brothers while trying to pick up the pieces and go on with their lives. William "Red" Dawson, who plays the role of Matthew Fox, is one of the All-Star cast members. Ian McShane, David Straithairn, and Kate Mara are also a part of the production.

Knute Rockne All American
Knute Rockne was released in the year 1940 and marked the debut of the film All American, which owes some of its notoriety to the fact that it starred Ronald Reagan, who would go on to become the 40th President of the United States. Even though some people may view this movie as propaganda for Notre Dame, it is easily one of the best college football movies ever. Pat O'Brien stars Rockne, putting Notre Dame University front and centre in the movie. The most iconic line, however, would be delivered by Ronald Reagan as the dying George Gipp.

The Program
It's safe to say that this movie packs the strongest emotional punch of the five. An investigation into the circumstances surrounding the fictional ESU Timberwolves and all of the negative aspects associated with their programs, such as steroid use, academic fraud, arrests, and the struggle that coach Sam Winters goes through to keep it all together, is conducted. James Caan gives a strong performance as Winters in this role. Even though it came out in 1993, The Program is probably still vivid in the recollections of anyone who watched it back then, almost 30 years ago. 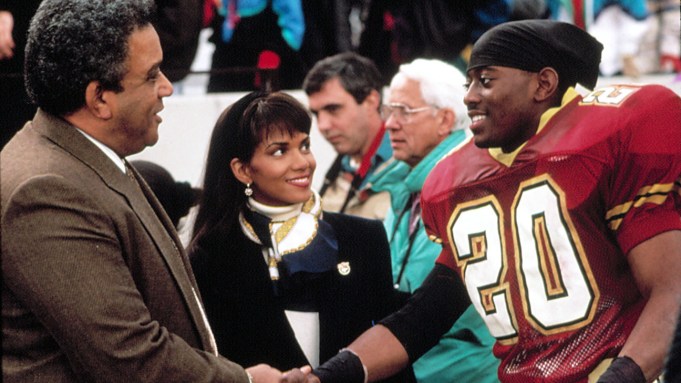 The Waterboy
The Waterboy was released in theaters five years after the movie The Program and is regarded as one of Adam Sandler's most hilarious comedies. It tells the story of Bobby Boucher, who starts as a waterboy while attending the University of Louisiana but eventually becomes a linebacker for South Central Louisiana State University after his coach figures out how to get him moving. The story takes place in the 1960s. Henry Winkler delivers a flawless performance as Coach Klein, which results in a good deal of comedic success. In addition to being one of the best movies about college football of all time, it is also among the best comedies ever produced.

Rudy (1993)
Rudy continues to be one of the most iconic and memorable films in the history of sports cinema. It is often regarded as the best movie ever made about college football. In the version released in 1993, Rudy Ruettiger plays the role of an inspirational walk-on who hopes to one day play for the Fighting Irish. Rudy is another picture that could be written off as Notre Dame propaganda; nevertheless, despite this, the movie is still a high-quality production that is deserving of the top slot on any such lists. There is no other college football movie that does a better job telling the story than this one. Sean Astin plays the role of the titular figure, and the dynamic between his character and groundsman Fortune, a former Fighting Irish player-turned-groundskeeper played by Charles S. Dutton, lends the movie an extra edge.

For more college football rumors this season, check out Chat Sports on YouTube!