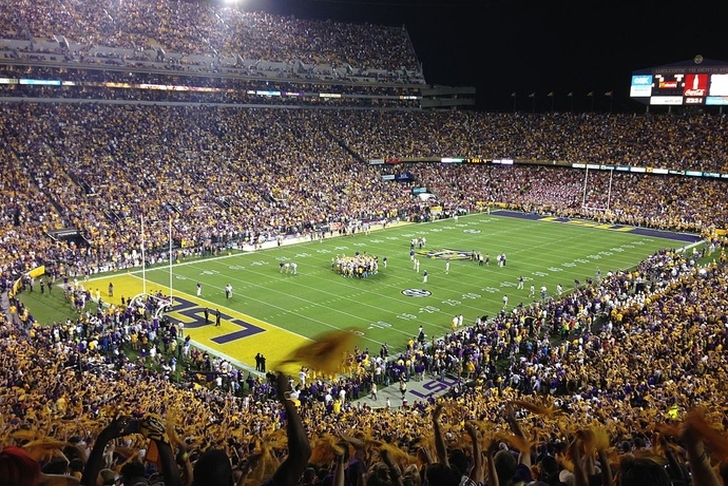 College football fans are eagerly awaiting the season’s eighth week of action on the back of what has been a very entertaining season, filled with upsets. The schedule doesn’t look all that promising heading into Week 8, admittedly, but given the way things are going in terms of shocks, fans may very well be in for another interesting slate.

So far this season, the upsets aren’t few, neither are they far between. And they tend to happen at the most unexpected of times. It’s likely that there are a few more inbound, with a number of the top-ranked teams going into the week as favorites.

No.10-ranked Oregon could be one of the teams to throw up a surprise. They’re scheduled for a trip to UCLA after a narrow win against the California Golden Bears on Friday.

Oregon made their way into College Football Playoff contention with a win against Ohio State in Week 2 yet they haven’t stirred up much confidence in the games that have followed. A win against UCLA is likely to leave them looking a lot better as the NCAAF odds favor the Bruins for a win in Saturday’s game.

Another good one should be coming up in the form of Alabama Crimson Tide vs. Tennessee Volunteers, with the latter playing at home. Alabama’s the fifth-ranked team at the moment. No.5 Ohio will hope to keep things moving in the green at Indiana while Ole Miss, ranked No.12, will host LSU.

That said, let's break down some of the matchups expected to be the best of what Week 8 will have to offer.

Coastal Carolina at Appalachian State
Appalachian State is set to host No.14 Coastal Carolina this Wednesday in what could be the informal Sun Belt East title game. The Mountaineers have already lost one, having failed to beat Louisiana in a cross-division affair, yet they would have a tie-breaker on the Chanticleers in the East should they get a win in their upcoming match.

Coastal Carolina presents a huge challenge, though, and fans would do well not to hope for an easy win, if at all.

Oregon as UCLA
The Bruins already have a win over LSU from the first week of action at 5-2 and, should they come up with a win vs the Ducks, will be back in the Pac-12 race. Oregon had a pretty difficult time beating Cal this weekend and, as noted above, haven’t been at their best since beating the Buckeyes in early September. A win at UCLA will do their season a whole lot of good.

Ohio State at Indiana
The Hoosiers had the perfect opportunity to fashion an upset against a top-ranked Big Ten East rival when they faced Michigan State on Saturday. However, they fell 20-15.

They’re now looking ahead to playing a formidable side in the Ohio State Buckeyes, who have been averaging 59 points per game over the course of its last three matchups. Indiana could be the owners of a 2-5 record by the time this one ends, yet it’s another great opportunity for an upset.

Tennessee at Alabama
Alabama football is coming off a 49-9 demolition of Mississippi State, having gotten back to the winning side of things with a resounding result. They’re now poised to take on a Tennessee team likely still wobbly following a tough loss to Ole Miss. There’s also the game within the game bit as Crimson Tide head coach Nick Saban could be extra motivated to hand the Volunteers a loss after they fired his former assistant Jeremy Pruitt at the end of last season. New head coach Josh Heupel could be in for a rude welcome.

Heupel lamented his team’s injury problems after the loss to Ole Miss but praised its competitive spirit.

“We were probably the thinnest football team in America when we started,” he told reporters. “We got way more guys injured than you would want. But man, the fight, the competitive spirit inside our locker room, the want to play for the guy next to you because you love him, and willing to do anything, we’re growing and developing the right way. Those pillars inside of our program, if we keep building upon those, we’ll have a chance to have a really special program here.”

LSU at Ole Miss
With both teams pulling off climatic wins in the SEC last week, it will be interesting to see who can survive this upcoming clash. LSU emerged triumphantly as a double-digit underdog vs. Florida, but Ed Orgeron is now OUT as head coach. Ole Miss, meanwhile, managed to outlast Tennessee in what was a pretty dramatic game.

The Tigers have been hit by injury woes but have been trudging forward even in the knowledge that the coaching staff could be changed at some point.