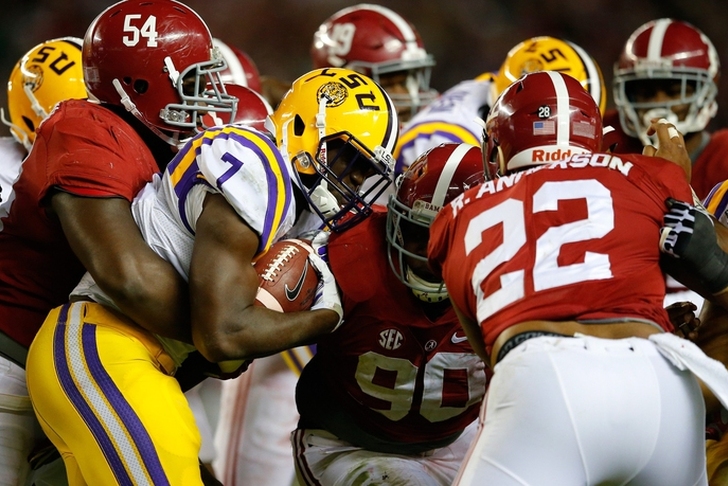 The start of the 2016 college football season is months away, but the attempts to figure out which team will have the best defense have already begun. While there could be a few dismissals, transfers and last-second additions, we have a good idea of how each team's defense will look this coming season.

ESPN has put together its Football Power Index for defense in the 2016 season, with some interesting results. ESPN's FPI model is comprised several elements. The first is the last four seasons of performance by a team, with last year counting the most. The second is returning starters. Those two mentioned make up the bulk of FPI, although recruiting (as judged by ESPN, Phil Steele, Rivals.com and Scout.com) plays a role as well. The end result of ESPN's FPI for defense is expected points per game (EPA). The teams below are listed in reverse order of FPI.

The first team to miss the cut was the Ohio State Buckeyes. That's likely because although the Buckeyes recruit well, they lost a ton of talent on defense. In addition, ESPN's FPI does not view the Big Ten favorably. With that in mind, let's detail the top 15 defenses in college football, according to ESPN.

15. Texas Longhorns
For the sake of Charlie Strong's future, the Longhorns better hope the defense plays this well. The Longhorns have recruited well under Strong, especially on defense. It's time for those players to perform.

14. Michigan Wolverines
The Wolverines poached one of the top defensive coordinators in Don Brown from Boston College. There's plenty of talent on the defense, including returning players and newcomers. This might be too low for Michigan, as Pro Football Focus thinks they could end up with the best defense in the nation.

13. Louisville Cardinals
The Cardinals might be a bit of a surprise, but they have talent. Josh Harvey-Clemons, Devonte Fields and DeAngelo Brown could all have big seasons for an underrated Cardinals team. Download the Chat Sports App for more college football coverage.

12. Tennessee Volunteers
The Volunteers are in a similar spot to Texas. They've recruited well and it's time for those players to next step. The Vols defense was pretty good last year, but it could be Top 10 good this year.

11. Ole Miss Rebels
Sure, Ole Miss lost Robert Nkemdiche, but few programs in the SEC have brought in the level of talent that Ole Miss has. The Rebels aren't rebuilding this year; they're reloading.

10. TCU Horned Frogs
TCU was killed by injuries last season, but the experience the backups got will only help this season. Gary Patterson still produced a Top 25 defense in efficiency last year and his defense should be even better this season. TCU returns eight starters.

9. Florida State Seminoles
FSU is only two years removed from being the nation's top defense, and they should be better than last year's unit that missed out on the Top 20. Six starters return and there's plenty of talent on the two-deep.

8. Clemson Tigers
Clemson had one of the best defenses last year, but return just four starters. Still, the recent success Clemson has had on the defensive side of the ball helps them out. This is a talented, but young, defense.

7. Texas A&M Aggies
The Aggies have arguably the best defensive player in the nation in pass rusher Myles Garrett. That helps the Aggies, who were No. 17 last season. While there are questions about the Aggies' offense, there's plenty of talent on the defensive side.

6. UCLA Bruins
UCLA was 35th in the nation last year, but ESPN is projecting a big jump this year. That's because the Bruins return nine starters on defense. If UCLA stays healthy this year, they could have the top Pac-12 defense.

5. Oklahoma Sooners
The Sooners are the top Big 12 team on this list. They return just five starters, but had a Top 5 defense last season. With a talented secondary, the Sooners should be deadly on defense once again this season.

4. Washington Huskies
It's okay if you're surprised that Washington is so high. The Huskies are flying under the radar, despite having a Top 10 defense last year. There's plenty of young talent on this team and many are expecting the Huskies to make a major leap this year.

3. Florida Gators
This is the first of three SEC teams to lead this list. While Will Muschamp struggled at Florida, he brought in a lot of defensive talent. The Gators have six starters returning and several highly-touted recruits ready to step up.

2. LSU Tigers
LSU was just 21st in the nation on defense last year, but return nine starters. LSU added plenty of talent this offseason and new defensive coordinator Dave Aranda could produce the nation's top defense. However, there's a team LSU doesn't like that leads the way.

1. Alabama Crimson Tide
The Tide had the best defense, and although they return just five starters, ESPN projects big things for them next season. With so many blue chip recruits, projecting another banner season for the Alabama defense isn't much of a stretch.